Tonic water and club soda are two of the most popular carbonated beverages. They are quite different in their features, but equal in their use in cocktail mixers. There are two reasons why you might want to know more about tonic water vs club soda.

The first one is you want to know what to put in your cocktail. The second is you are seeking a healthier lifestyle and you are mindful of your dietary choice, including what you drink.

With that in mind, we will try to explain all of the tonic water vs club soda differences.

What is tonic water?

Let’s start by explaining each drink separately. What is tonic water? Simply put, it is a carbonated beverage containing a compound called quinine. That creates its signature bitter taste. Manufacturers also add sugar to the drink to balance the bitterness.

Many would explain tonic water as a drink with a bitter and sweet taste. Sometimes, we refer to it as a citrus flavor. Originally, tonic water was a medicinal drink that professionals offered to soldiers to treat malaria. But it has become popular due to its flavor.

Tonic water has the most unique taste among carbonated drinks. It is often used as a mixer for cocktails, especially those based on gin and vodka.

Other carbonated drinks like sparkling water, seltzer water, and club soda have a thin consistency. Tonic water does not. The popular drink has only small traces of quinine to give it flavor, or bitterness if you like.

What is club soda?

Similar to tonic water, club soda is a popular mixer for cocktails. You can find it in Mojito and Tom Collins.

Closely related to other types of bubbly water, club soda is water carbonated by injecting it with carbon dioxide gas, and then infused with minerals. The amount of minerals in the water depends on the manufacturer.

The best way to describe club soda is the simplest carbonated water. Think of it like regular water that has been carbonated and has some added minerals in it.

We said these two are types of carbonated water. Bartenders use them to mix cocktails. Now, let’s talk more about the differences between the two.

Looking at the components, you can tell club soda tastes a bit salty because of the mineral salts. Tonic water, on the other hand, has a unique bitter and sweet taste.

The carbonation of club soda makes it a bit acidic. You cannot compare the taste to the flavorful drink that is tonic water. The latter contains the alkaloid quinine, responsible for the bitterness that enhances the taste and flavor.

Fun fact: both of these drinks are available in flavored options. You can get club soda in citrus flavor, while tonic water has varieties like cucumber and Mediterranean.

Club soda doesn’t contain any calories, sugar, protein, fat, or carbs. There may be traces of calcium, zinc, magnesium, and copper, depending on the manufacturer.

Tonic water, on the other hand, has a higher nutrition profile. Tonic water contains sugars, but also calories and carbs. It contains sodium but no fat, fiber, or protein.

Some drinks are naturally carbonated. Think sparkling water. But club soda and tonic water have the exact source of carbonation, which is infused carbon dioxide. Both of these have between 2.5 and 3.5 volumes of CO2 per volume of liquid. 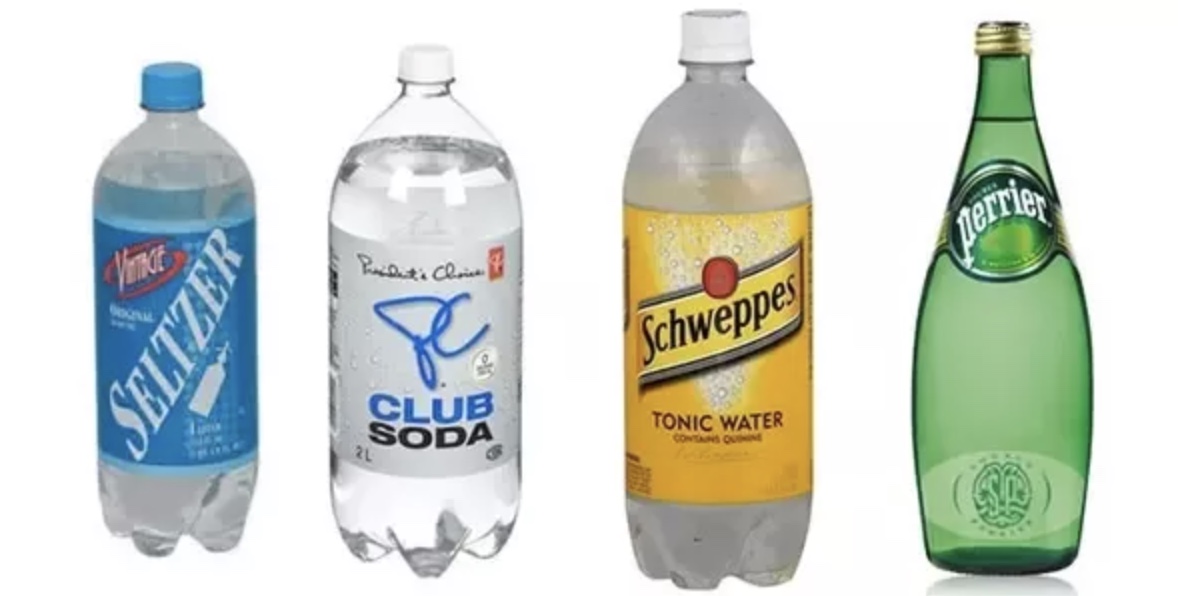 When you think of the tonic water vs club soda debate, often it is about which one is better for cocktails. Both of these carbonated drinks work well in cocktails. Mixologists love to use them both, and sometimes they even use them as alternatives. Club soda is a staple for drinks like Tom Collins, Paloma, and similar because of its decent amount of carbonation.

But tonic water is one-half of the iconic beverage, Gin and Tonic. Beyond the famous drink, tonic water works well in any cocktail with vodka, rum, port, tequila, cognac, whiskey, bourbon, and anything else.

Because of its bittersweet flavor, tonic water compliments other ingredients as well. Club soda, on the other hand, mainly adds bubbles to the drink and makes it more refreshing. Tonic water adds depth of flavor as well.

Now here is one area where club soda is much better. Because of its mineral content, club soda will hydrate you better than plain water. And it is safe in calories and sugar, almost flavorless.

Many people think sodium can cause dehydration. But that is not entirely true. Without enough salt, we only increase the risk of dehydration.

Tonic water contains added sugar, mostly from high fructose sources, and that is why it doesn’t provide enough hydration compared to club soda.

Yes, initially, you might feel refreshed after consuming a soft drink like tonic water. But after consuming sugary beverages, you often get thirstier after a while. Sugar consumption leads to water loss in the body, and that leaves you dehydrated. And that is not the only problem. High sugar consumption might lead to problems like obesity.

When to use it?

These two are similar in a way they both make a good addition to a cocktail. But there are also differences as we saw. When to use either one of them? Here is a simple summary.

Use club soda if:

Use tonic water if:

Which is the healthy one?

We said, in the beginning, there are two aspects of the tonic water vs club soda discussion. One is cocktail use, and the other is health.

Speaking of health, which of these drinks is the healthiest. The choice here is simple, club soda is much better.

Because tonic water contains a high amount of added sugar and calories, it is wise to limit your intake of it. High sugar consumption can often lead to problems like type 2 diabetes and obesity. Club soda will keep you hydrated and contains 0 calories. Sounds much better, right?