I made this recipe last night, and it was delicious. They are zucchini-stuffed raviolis topped with a roasted zucchini sauce. The recipe used five zucchinis, which is great since I have dozens of them right now from the garden.

In the following recipe, I used a pasta dough from Lidia’s Family Table, one of my all-time favorite cookbooks. For the sauce, I modified a recipe from Real Simple Magazine.

You will need a pasta machine to make this recipe.

Here’s the whole thing from start to finish:

In a separate bowl, crack open two eggs and muddle with a fork. Add the olive oil and water to the eggs.

Sift 2 cups of flour into a mixer or bowl. Pour the egg mixture into the flour. Mix together for 1 minute on medium speed, or with a spoon or spatula, until you have a shaggy ball.

Knead the dough. I used a dough hook for my mixer and let it run for 3 minutes on medium until the dough became a shiny ball. Alternately, you can turn the dough out onto a floured surface and knead by hand.

Let the dough sit for an hour.

In a food processor, combine all the ingredients: zucchini, garlic, cheese, and salt/pepper. Taste to make sure it isn’t too sweet. If so, add more salt. 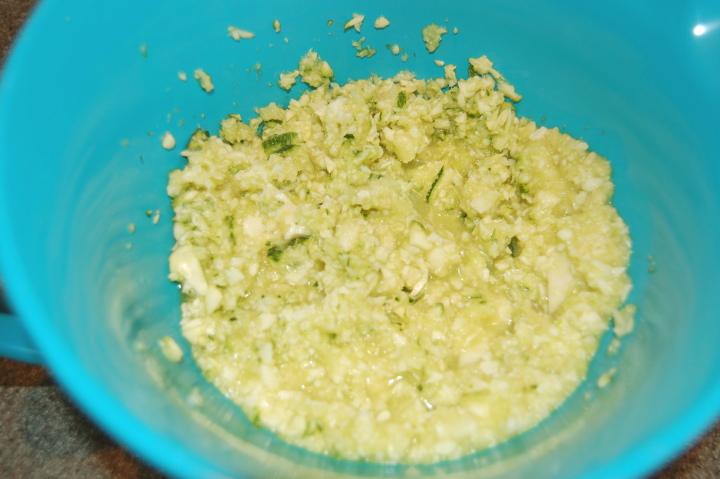 Put the mixture in a strainer and push at it so that the extra liquid leaves the zucchini. It’s important to do this to avoid liquid-y ravioli. Leave the mixture sitting in the strainer until it’s time to use it so extra liquid can drain out.

Run the pasta through the pasta maker. Take your dough and divide it into four parts, then run it through each level of your pasta maker from the largest to the smallest. 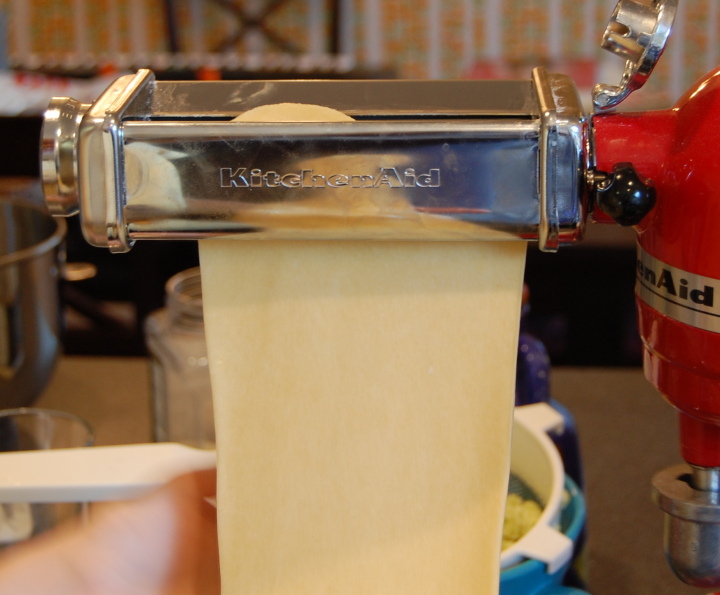 In the end, you have four large pasta noodles like you would use for lasagna. Now it’s time to make the raviolis.

Lay the noodle out on a floured surface. Cut off any jagged ends so that you are dealing with a large rectangle. Fold the noodle in half so that you have a crease down the center.

Using a spoon, put about 1 Tbs of filling on the lower half of the noodle. Repeat so you have a row of filling laid out, like so: 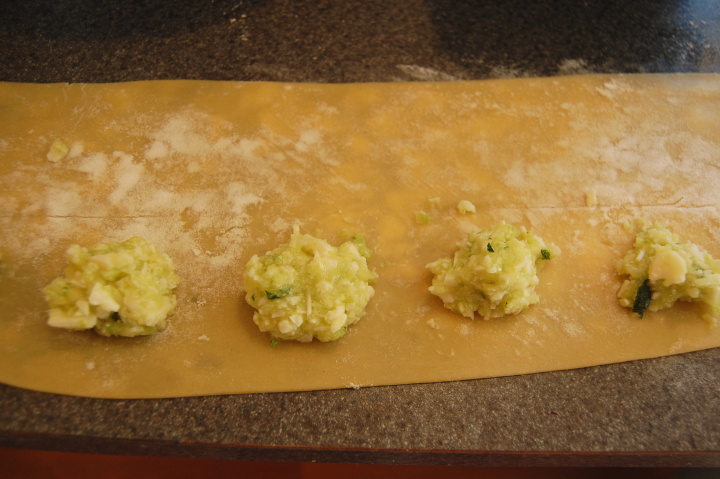 It’s time to close the ravioli. Crack the third egg into a bowl and muddle it. Using a pastry brush, “paint” the egg around the edges and in between the filling. This will hold the ravioli together. Here is a diagram of where I painted the egg:

Fold the noodle over. Working from back crease, gently push all the air out of the noodle around your filling. A lump should start to form.

Then, cut each ravioli off with a pizza cutter or knife: 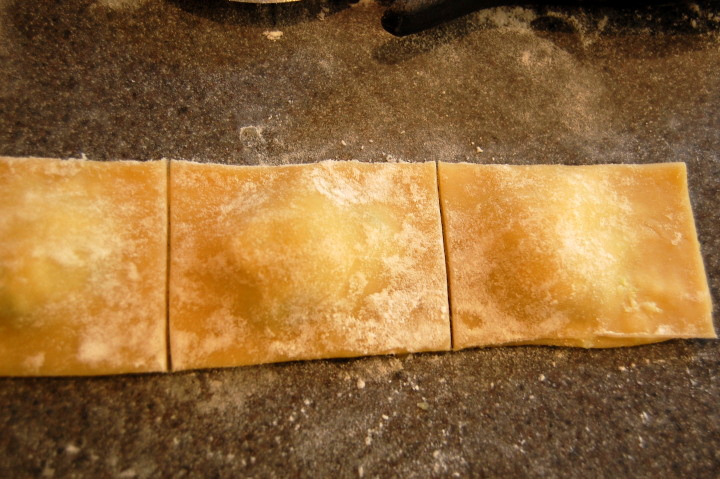 Using a fork, press around the edge to seal each ravioli: 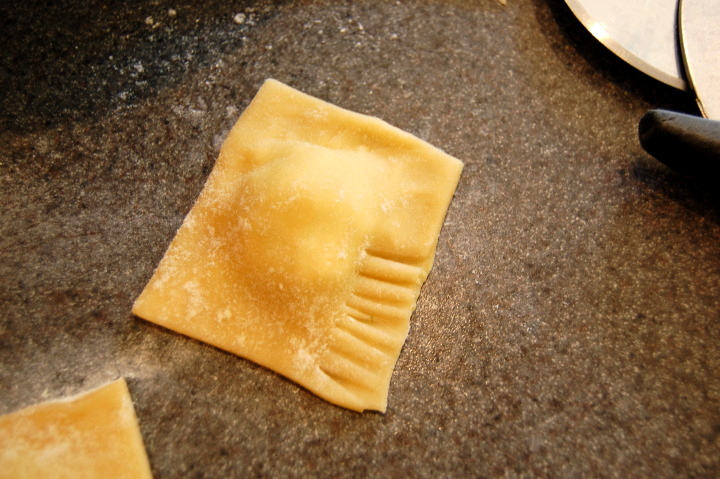 Repeat until you end up with about 30-40 raviolis. I held 12 zucchinis back for the meal. For the rest, I lay them flat on cookie sheets and put them in the freezer. Once they were frozen flat, I transferred them to plastic bags and stored them in the freezer for a quick gourmet meal any time I want. 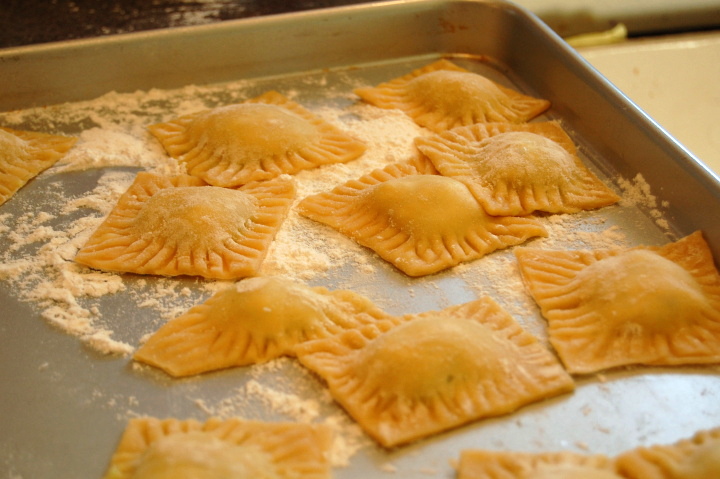 On the stove, bring a large pot of salted water to boil for the ravioli. Preheat the oven to 400 degrees.

Slice up your other three zucchinis and crush the garlic. Drizzle with 2 tsp of cheese, the olive oil, the red pepper flakes, and salt and pepper in a large baking pan. Put the whole thing in the oven and cook for 20 minutes. When it comes out of the oven, it looks like this:

Using a slotted spoon, lower your ravioli into the boiling water. Let it boil for about 3-4 minutes. When they are done, the ravioli will float to the top of the water and change to a lighter color.

Remove from the ravioli from the water and gently toss with the zucchini mixture, the rest of the cheese, the basil, and a slight sprinkling of salt. Enjoy.

The resulting pasta is worth all that work. It is cheesy, light, a little spicy, and very zucchini-y. It is the kind of dish that makes you feel like you are eating at a fancy restaurant. Also, because you have frozen two-thirds of the ravioli, you can make more of this dish anytime you want. Oh, and it’s vegetarian and cheap to boot.

It’s hard to tell the per-serving cost because I made more ravioli than I did sauce. However, pretending that the $2.32 is just for the ravioli–which it isn’t, because it includes the sauce (so it’s even cheaper)–it would be about $.39/serving.

2 thoughts on “Zucchini on Zucchini Raviolis”