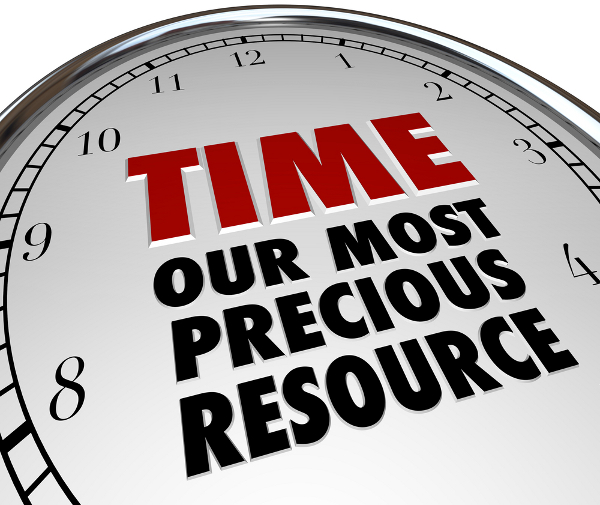 What’s the most precious resource in your life? For me, it’s time. It’s the one thing you can’t get back. So I decided to see if I could free up a few more hours a week by doing a Time Audit.
For two weeks, I carried a notebook with me and wrote down everything I did and how much time it took me to do it. Then I broke all my activities into categories, tallied how much time each one took, and compared them to total time spent. From there, I broke the categories into percentages, so I could tell how much time I spent working, sleeping, eating, watching TV, and so forth.
Why do this? To:

* Find out what I was really spending my time on.
* Find extra hours in the week.
* Learn how to use my time more efficiently.

Writing down everything you do is an annoying chore, but it was worth it because now I have an accurate idea of how I was using my time, and where I was wasting it. I learned a lot about myself in the process.
Here’s a few things I learned:

THE GOOD:
I work a lot. Turns out I spend the majority of my time working, which is fine with me. I love to work.
I read a lot. I was surprised to find I spend a portion of every day reading books. I didn’t realize it was such an ingrained habit, and I think it’s a good one to have.
I spend a lot of time socializing, being active, and playing with my son. All good things.

THE BAD:
I sleep too much. What? An adult woman who gets *too much* sleep? Yep. I was frequently getting over 9 hours of sleep per night. I believe in getting enough rest, but that’s just ridiculous. So I started getting up an hour earlier, which means an extra 7 more hours a week.
I spend too much time cleaning. I was shocked to find that I spend 9 hours a week just cleaning. That’s insane! My house isn’t even that clean. I’m trying a new system out to save time—if it works I’ll save an extra six hours a week.
UPDATE: Related post How To Save Time Cleaning The House.
I spend too much time cooking. In my effort to stop eating out so much, I’ve been making meal plans and cooking at home. The uptick of that is that I spent way too much time in the kitchen and at the table—up to 15 hours a week. Can you ever win? I like to cook, but over an hour of total time on a weekday spent devoted to dinner (including eating) seems excessive. SO I’ve been experimenting with a new system for that too, and it seems to be saving me an extra five hours or so in the kitchen. I’ll share about this in a separate post too.
UPDATE: Related post
How To Save Time In The Kitchen
I watch too much TV. This one shocked me. On a weekday, we watch maybe one or two shows and that’s it–but if you add that up along with a movie or two, and it ends up being 12 hours a week, a major time suck. I figure seven hours a week is enough TV for me, which will free up about five extra hours a week. I’ll look into how to fix that one too.
So: If I address these problem areas, I’ll free up 23 hours a week.
That’s right, if I change some of my habits, I’ll gain almost an entire day of free time per week, thanks to the time audit.
I’d better get started.