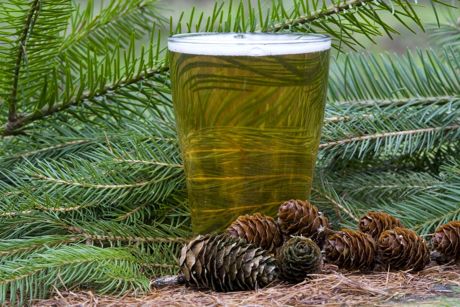 Don’t throw out your Christmas tree–make beer from it first. Supposedly, you can recycle some of the needles into Spruce Beer, according to this article.

Those who have a living Christmas tree can harvest the fresh new growth from their tree to make the following drink, which has been adapted from an 18th century recipe. It is also possible to use the needles from a dead Christmas tree, as long as they haven’t dried completely out and are still pretty green.

In fact, Spruce Beer is a very old drink. According to NPR, “Ancient Scandinavians and their Viking descendants brewed beer from young shoots of Norway spruce, drinking the beer for strength in battle, for fertility and to prevent scurvy on long sea voyages.” I suppose ancient Scandinavians had more access to spruce needles than the grain we use to make beer today.
Well, why not give it a try? Here’s a recipe from Andy Hamilton:
Spruce Beer

Bring the water to the boil and add the spruce, hops and ginger. Boil for 30 minutes. Stir in the malt extract and boil for a further 10 minutes. Strain into a fermentation bin or food grade bucket and, when cooled to room temperature, add the yeast.
Leave in a warm place for one week. Siphon into bottles. Will be ready to drink immediately.

No word if there is such a thing as Douglas fir beer yet.