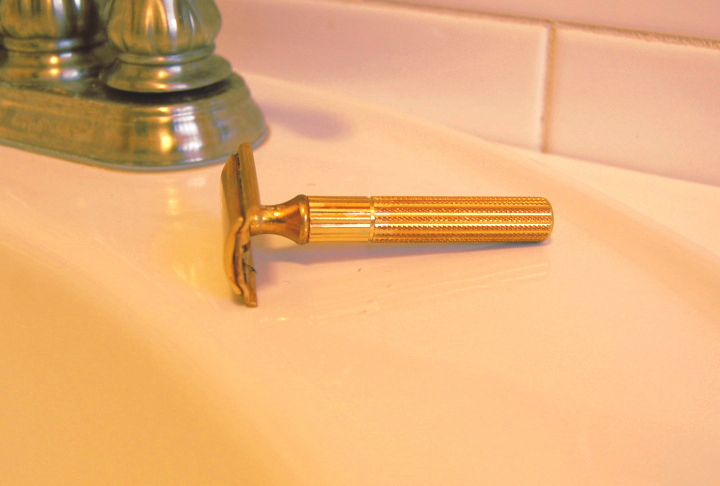 This is my safety razor. It’s from the 1940s. I use it to shave my legs.
I originally got the razor from an antique store. I properly cleaned it, of course. The reason they are called “safety razors” is because they were the next design up from a straight razor. They cut you less than the straight razor, thus the name.
I didn’t always use a safety razor. Until recently, I used a Gillette Mach 3. Before that, I used the disposables you get in plastic bags for $5. Then my husband got obsessed with old-fashioned shaving, and I learned that safety razors are a drastically cheaper option for shaving your legs.
Put it this way: A Mach 3 razor blade is about $13 for 4 blades. That is a staggering $3.25 per blade. If you get 6 shaves out of it, that $.54 per shave.
Compare that to the safety razor. We purchased 100 razor blades for $10, or $.10 per blade. If you use that blade 6 times, that’s less than two cents a shave.
That’s a savings of $3.15 per blade, or $.52 per shave.
Why is the price so different? It gets down to the proprietary nature of branded razors. Take Gillette–they have created a razor that takes specific blades so that no competitor can come along, make the same blade, and undercut them in price. If you buy a Gillette razor, you’re stuck with their blades.
By contrast, safety razors use common standard razor blades. Everyone makes them–you can get them at your corner drugstore–so they cost what a piece of sharp metal should cost, i.e. next to nothing.
I have also noticed that I get almost no razor rash or ingrown hairs with the safety razor. While the Mach 3 actually pulls the hair from under your skin to cut below the skin surface, the safety razor simply cuts along the hair follicle, thus making ingrown hairs unlikely. And because you’re dealing with one blade instead of three, you have to go slower with the safety razor, which is less stressful to the skin overall. This is especially useful for sensitive areas.
Of course nothing is perfect. It is supposed to be easier to cut yourself with a safety razor, although I haven’t experienced this. Also, it takes more time to shave, so it’s not great when you’re in a hurry. I keep some disposables around for when I’m in a rush and can’t be bothered to fuss with the safety razor.
Here’s a rundown of the safety razor:

Want to learn more? Here’s a whole forum of guys who can teach you about the safety razor.

8 thoughts on “The Safety Razor”