If you have watched any cooking programs on TV lately, you have probably noticed sous vide even if you didn’t know that was what it was called. Sous vide is a slow cooking method that combines vacuum sealing with a kind of low-temperature water poaching. The idea is that the food is cooked for a long time at the exact right temperature, leading to two advantages:

The food, especially meat, comes out extremely tender with sous vide cooking. Why? Low temperature and long cooking times always mean tenderness, but in addition, the meat is sealed in a plastic bag, so there’s no oxidation occurring during cooking. The meat holds in its juices.

Chefs also love sous vide because, although the temperature has to be maintained, the cooking time doesn’t have to be exact. You can leave food in a sous vide oven for hours and it will stay the same. So if you are in a busy kitchen and someone orders a steak, you simply pull a perfectly done filet out of the machine, pan sear it for texture, and bam, you’re done.

To do sous vide at home, you can either buy a $449 machine or you can make one yourself. We tried DIY sous vide this weekend, and it worked out wonderfully. It turns out that home sous vide is easy and well worth the effort.

However, you do need some equipment, as follows:

For the food itself, we needed:

We wanted the steaks to be cooked medium, which is 135 degrees. How did we know that? A chart telling cooking temperatures came with our thermometer, but you can also look it up online or in cookbooks or just ask someone. Meat cooking temperatures are common knowledge.

So we had our target temperature. Now it was time to try sous vide.

First, we put salt and pepper on each side of the steaks, just like you normally would. Then we put the steaks beside each other–but not touching–in a vacuum sealer bag and sealed them up. 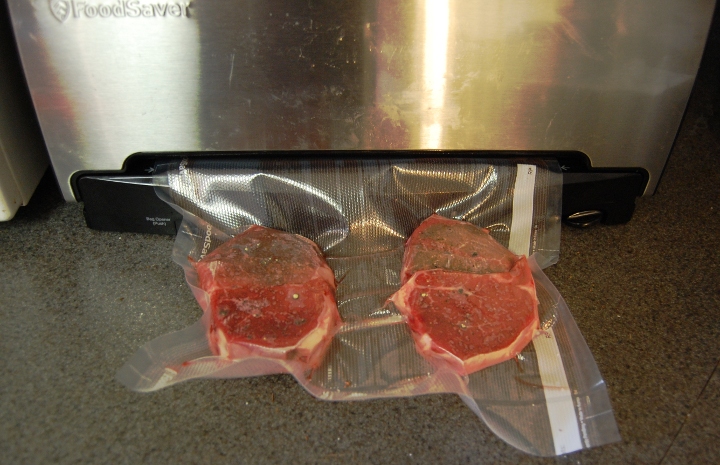 Next, we set up our “high-tech” sous vide water oven. We filled a pot with warm water. Then we hooked the digital thermometer to the side of the pot so that the temperature gauge was sitting in the water but not touching the pan. We did this by extending it with a clip that comes with the thermometer. You can also use a black metal paper clip. 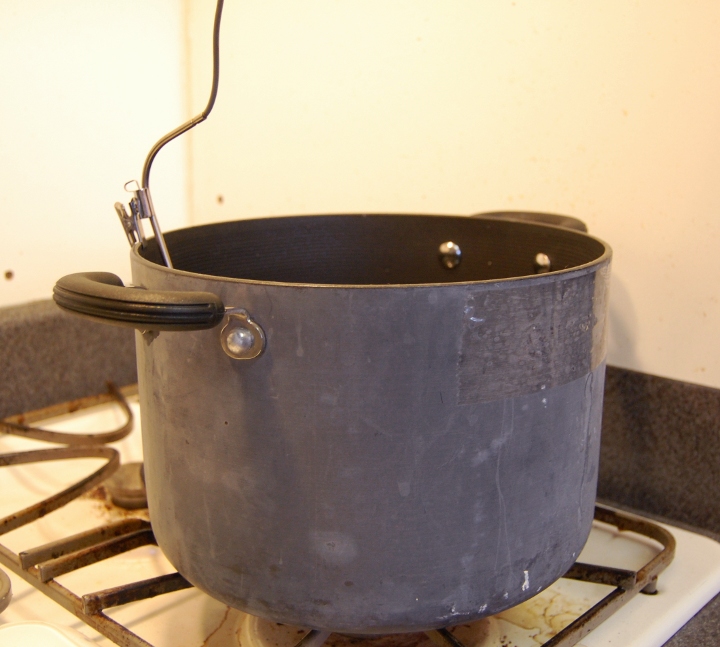 We put the stovetop on medium low and set the temperature on the thermometer at 135 degrees. Then we waited for the water to reach that temperature. It took about 10 minutes.

When the temperature had reached 135 degrees, we put the vacuum-sealed steaks in the water. 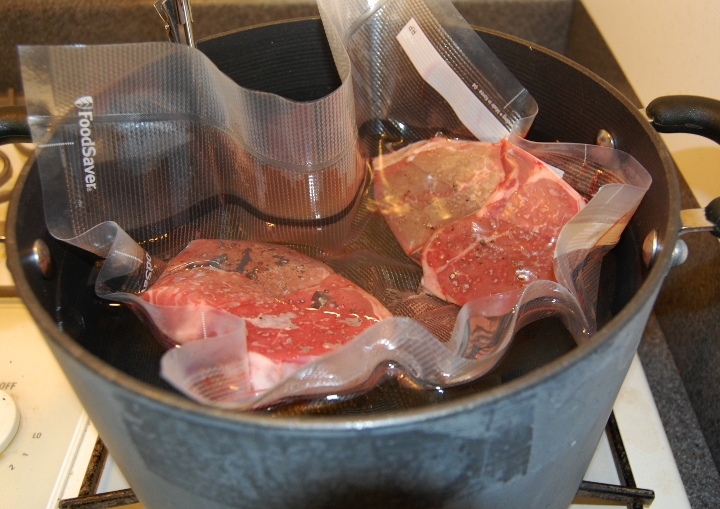 Of course, they floated. That wasn’t good because the meat has to be immersed in the water and yet not touching the bottom of the pan (the bottom is hotter than 135 degrees). So, I took a vegetable steamer and put it on top of the pot. It pushed the steaks down so that they were immersed in the water. You can also use a pot lid flipped upside down.

Sous vide takes a long time. There’s no exact time table here because, as I said before, you can have the steaks in the water for hours and they will stay at your required temperature.

We waited an hour, which turned out to be fine.

The only tricky part of DIY sous vide is monitoring the temperature. We wanted to keep the meat between 134-135 degrees. To do this, we set the stovetop on the lowest temperature and the alarm on the thermometer at 136 degrees. When the temperature got that high, the alarm went off and we added 1 cup cold water to the pot. This brought the temperature down to 134 degrees. It took the water 10 minutes to raise the two degrees again, the alarm went off at 136 degrees, and we added another cup of cold water. We did this every ten minutes and it kept the steaks right around 135 degrees.

After an hour, we took out the steaks. They looked exactly like boiled meat. It was time to sear them to get a good crust.

Why sear at the end of the cooking process and not the beginning? If you seared the steak at the beginning, the crust would get soft and weird in the vacuum-sealed bag. With sous vide, you cook the meat from the inside out.

To sear, we put approximately three tablespoons of oil in the frying pan, heated it up, and dropped in the steaks. We cooked each side for about 30 seconds to 1 minute, or until there was a nice brown crust. The end results? 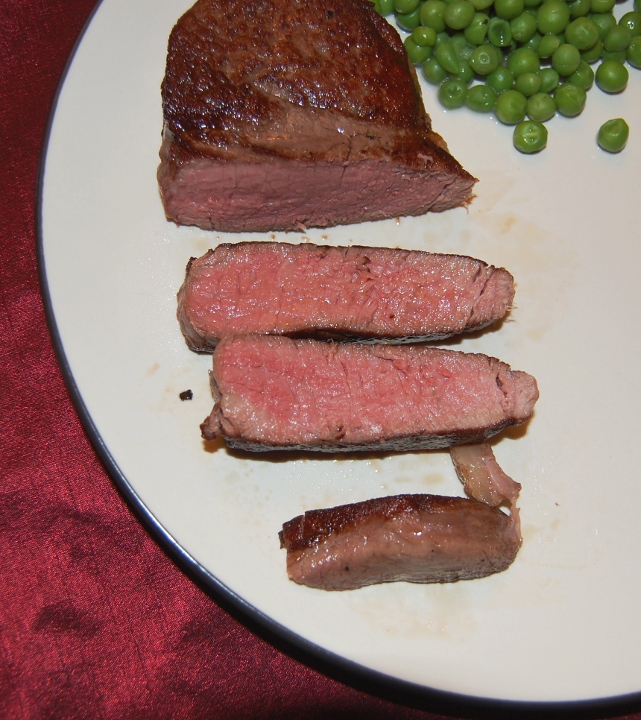 This was one of the tenderest steaks I have ever eaten. It was perfect. I would absolutely do this again, maybe even this week with another easy-to-overcook meat: pork chops.
So in summary: Vacuum seal, get the water to the temperature you want the meat to be at, stick the meat in, monitor the temperature, and sear. The end result? Perfectly cooked meat.

ETA: There is some concern in the comments about this giving you botulism. As I said in the comments, I do not think this is an issue for the following three reasons:

1. Botulism spores take at least 8 hours to germinate into the bacteria that kills you. For this to happen, you would have to cook the meat sous vide and then leave it sitting in the bag in lukewarm conditions for at least a half a day. Since you are going to take the meat right out of the bag and eat it, you don’t need to worry about it.

2. Botulism cannot penetrate a dense muscle like a steak or pork chop. As such, even if there WERE bacteria on your meat, it would be on the surface of the meat and so pan searing it would kill it.