Awhile back, I did a Finish It Up challenge for myself to complete all the craft projects I have going on. Currently, I am focusing on number five on the list–mending–because three items of my clothing ripped this week. My pajama bottoms got a hole in the seam, the underwire of one of my bras came out, and the strap on my nightgown popped off. All in one week! What is going on here? Is this some sort of planned obsolescence conspiracy to get me to go shopping more often? Or am I just hard on my clothes? 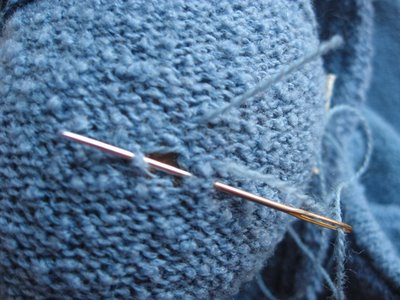 Out of curiosity, I did a search on the Internet to see what it said about mending, and discovered that a lot of people tell you not to do it. They say that you should go shopping instead. And while I see nothing wrong with throwing old clothes out and getting new clothes if you want to, what surprises me is the implication that there’s something wrong with you if you want to repair your clothes. There seems to be an idea out there that clothes are dirty or bad if they get a hole or lose a button or the underwire pokes out. The fact is, mending is basic frugality. My pajama bottoms, which were a gift originally, cost $40 at Victoria Secret–if I mend them, they last longer and save me the $40, at least for a while.

Mending stretches the life of your wardrobe.

Plus, if you’re doing it right, you can’t tell that something has been mended. If you are repairing a seam, you are simply returning the garment to the state it was before it ripped. In my mind, mending should always be invisible to the eye.
Besides, mending is easy. Most of the time, it takes 5 minutes of work. Here are some basic mending techniques:

Problem:  Your pajama bottoms ripped at the seam. To fix: Turn the pajama bottoms inside out. Match the torn edges of the fabric together so that the seam lays flat. Pin the edges together. Get some thread that is close to the color of the garment and thread a needle with it. Carefully stitch the seam again like you are the sewing machine connecting the broken stitching. Tie off with a knot and trim the thread.

Problem: Your button fell off your shirt. To fix: You saved the button, right? Because if not, this is going to be a lot harder. If you didn’t save the button, you can take your shirt to the fabric store and see if they have a similar button OR you can replace all the buttons on the shirt and give it a new look. If you saved the button, then take a look at Esquire’s how-to on replacing a button. It even has spiffy illustrations. Simply put, you match the new button to where the old one used to be, and using a needle and thread, sew an “x” through the shirt and button, like so:

Then tie it off.

Problem: You have a hole in your sweater or sock. To fix: Froo*Gal has a great darning how-to on her site. Essentially, you weave matching thread through the hole and fill in the missing space.

Repairing a zipper. Problem: The teeth on the zipper on your jeans suddenly won’t line up, making it impossible to zip, like so: 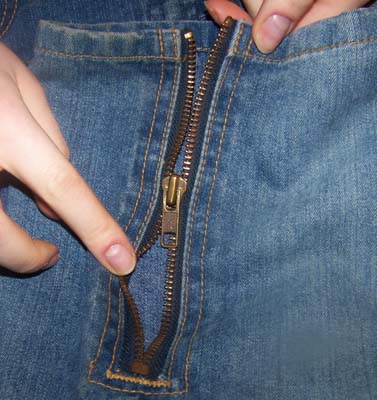 To fix: You can a. either replace the zipper by cutting it out and sewing a new one in, or b. fix it by removing the metal stub at the end of the zipper, lining up the teeth again, and replacing the metal stub with thread. DIY Fashion has a how-to on the metal stub option. I would add that it’s best to match the thread with the other stitching so that the repair won’t stand out.

As I said before, mending should be invisible. The only mending I don’t bother with is patching–sewing patches over holes that are unconnected to seams or can’t be darned. That is because nine times out of ten, patching looks mended. And really, once something starts to get big holes it, it’s probably time to toss it out. After all, clothes don’t last forever.