So I did it. I made my own limoncello. And it turned out great.
Limoncello, as you probably know, is a sweet lemon liqueur that originated in Italy. It’s an after-dinner digestivo that goes well with desserts and general celebrations.
I had been thinking of making my own limoncello for some time. After all, I have my own Meyer lemon tree, plus I love limoncello.
Since I knew that limoncello was simply lemon peel and simple syrup steeped in grain alcohol (in this case, vodka), it didn’t sound too hard to make. The one thing that held me back was grating the lemons. Apparently if you get any of the pith, the white part of the peel, into the limoncello, it makes the whole batch bitter.
I read many methods of removing the pith from the lemon–using a box grater, slicing the peel and scraping off the pith with a knife, etc.–but they all sounded annoying. Then I came upon Limoncello Quest, a site all about making limoncello. Its method for grating the lemons simplified everything for me: use a microplaner. This tool allows you to quickly and easily grate the yellow part of the peel off the lemon and leave the pith behind, like so: 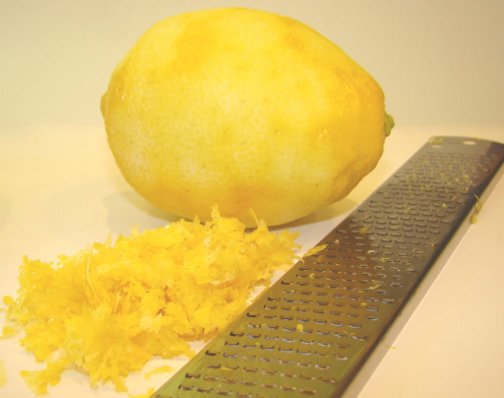 [Courtesy Christie’s Corner]
Once I had that detail hammered out, I decided to try it. I used the Limoncello Quest’s basic recipe for limoncello, except that I cut both the ingredients and the amount of time it steeped in half. I steeped the lemon peel in vodka for 22 days, then add simple syrup and let it steep again for another 22 days (44 total). When it was done, I filtered the limoncello and that was it.
Incidentally, I found that I didn’t have to filter as much as Limoncello Quest recommends–running the liquid once through a sieve and then a second time through a coffee filter worked swell.
The recipe yielded two bottles of limoncello. Here’s one of them:

(Obviously, I am re-using a bottle for this experiment.)
And the taste? Good! It was easily as good as any store-bought limoncello I’ve had.
And it was cheap. The last limoncello I bought cost $40 for a 350 ml bottle. The homemade version yielded about 750 ml (or thereabouts) of limoncello, an $80 value. Since the lemons were free from my tree, I just had to buy vodka and sugar for about $20, or $10 a bottle, a $60 savings.
So I’m a convert. Limoncello is easy and cheap to make, and tastes yummy. I think I have found a new staple for my kitchen.
You should try it too. Here’s the basic recipe and more detailed instructions here.

8 thoughts on “Make Your Own Limoncello”