Since posting about turning a bar of soap into liquid hand soap, a lot of people have asked me about making your own laundry soap. I have never tried this but I am curious about the subject. 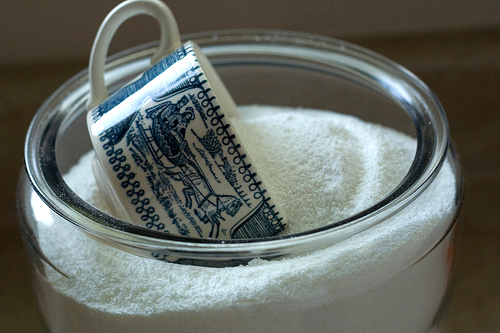 To make your own laundry soap, you use a combination of borax (found in the laundry section), grated bar soap, and something called “washing soda,” otherwise known as sodium carbonate. Arm and Hammer makes it. 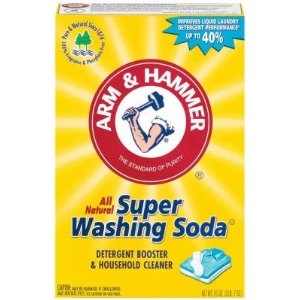 Some people use baking soda instead of washing soda, which is gentler but may not work as well.

The advantages of making your own laundry soap is that it is cheaper. Roughly speaking, store-bought laundry soap costs $.30 a load and homemade costs between $.03-$.05 a load, which is an astounding 85%-90% in savings. And, like most soap making, it can be more efficient because you make large batches and don’t have to replenish your soap supply as often.

Also, as with making your own liquid hand soap, making laundry soap is a way to use up bar soaps. You could use travel soaps, the ends of soap slivers, or any other extra bars of soap you have lying around.

Finally, laundry soap may be more environmentally friendly and have a lower toxicity than the store-bought stuff.

The downside–and this is why I hesitate trying it myself–is that it might not work as well as store-bought laundry soap, especially in high-efficiency washers. I also wonder if it is harder on your clothes in the long run. If that’s the case, making your own soap could be penny wise and pound foolish.

But not having tried it myself, I can’t say for sure. So, for further reading:

The ‘Make Your Own Laundry Detergent’ Debate

Making Your Own Laundry Detergent: A Detailed Visual Guide

Make Your Own Laundry Soap

. A straightforward recipe and a cost analysis, too.

If you have made your own laundry soap, tell me about it. Is it worth it?

19 thoughts on “Make Your Own Laundry Soap”