It’s time for a myth-busting blog post because there are so many misconceptions about wonderful broccoli. Broccoli is not GMO, contrary to popular belief.

Broccoli is cultivated from a wild growing cabbage variety known as Brassica oleracea, which is thought to have originated in the Italian region. This natural breeding process, however, took hundreds of years and does not qualify broccoli as a GMO.

As we become more conscious of what we put into our bodies, the false notion that broccoli, a healthy fibrous vegetable, is genetically modified may have surprised us. But, rest assured, broccoli is a natural plant that is completely safe to consume.

Still not convinced? Let me explain why broccoli is man-made but not genetically modified.

Is Broccoli Man Made? 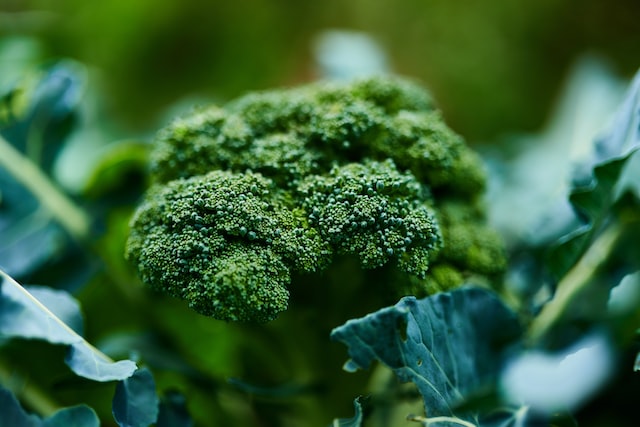 If you’re looking for a quick answer, you’ll almost certainly get a “Yes.” However, there are numerous interesting facts about broccoli that you should be aware of.

Selective breeding was commonly practiced by early farmers in the 1880s and even earlier; a process that allows them to create modified varieties of certain plants, or even a completely new plant that has never existed before.

The exact year broccoli first appeared is unknown. However, researchers believe the plant is older than 2,000 years, when the early varieties appeared.

Broccoli was first grown in Italy before being introduced to England and America in the 1700s, and it spread to other parts of the world after that.

Besides that, some sources claim that broccoli was first planted in the Roman Empire, despite the fact that it originated in the Mediterranean region and East Asia.

This plant’s name was derived from the Italian word “Broccolo.” Broccoli is the plural form of broccolo, which means “the flowering crest of a cabbage.”

If you’re hearing the term “selective breeding” for the first time, here’s a quick rundown of what it entails.

What Exactly Is Selective Breeding?

Artificial selection (selective breeding) is a lengthy process in which plants with similar characteristics are bred together to form a new species or species.

This process can take many years, if not decades, before the desired outcome is achieved.

One thing you should know is that early farmers used artificial selection, or selective breeding, to create a new plant that was more resistant to pests, disease, harsh climatic conditions, drought, and the list goes on.

Moreover, this process is carried out in a variety of ways, including propagation from cuttings, layering, grafting, and others.

Most of the modified plants we grow today took nearly a thousand years to develop into their current form.

Not only is broccoli, but the majority of the fruits, nuts, and vegetables we consume today are all synthetic. Since they were created so many centuries ago, we regard them as purely natural in their original state, free of human intervention.

Broccoli has been genetically modified. All of the common varieties have been genetically engineered to withstand the cold and heat, plant disease, insects, and chemical treatments used to grow them.

In fact, only two types of broccoli are genetically unmodified: one is a wild variety with very small florets (known as broccolini), and the other was created by splicing genes from several different vegetables (It was originally called rabe and belongs in a genus different from the traditional broccoli).

Broccoli is a cultivated vegetable. Man created its seed by exposing it to chemicals and radiation until a genetically modified seed was born.

Where Does Broccoli Grow?

Broccoli is a cruciferous plant that belongs to the same family as cauliflower and the majority of cabbage varieties. They are all descended from an undomesticated plant known as Brassica oleracea.

Although we cannot pinpoint exactly where this plant originated, there are historical records of it in Roman agriculture around 2000 years ago. Over hundreds of years, they bred the plants with more flowers, eventually creating what we now call broccoli.

For as long as people have been farming, they have bred special varieties of naturally occurring fruits and vegetables. This is done to develop species that are more resilient and abundant in the given climate.

It is a lengthy process that is nothing like lab-created genetically modified foods. We call it “artificial selection,” but it is actually a natural process.

How are Broccoli Plants Grown?

Broccoli thrives in a temperate climate with plenty of moisture, but it can also grow in drier soil. It is grown for its edible flowering clusters known as florets. The United States, China, and India are the world’s leading producers of this vegetable.

How Is Broccoli Produced?

You’re probably wondering how broccoli was created now that you know it’s not a plant that evolved naturally into its current form.

You’re probably already picturing how broccoli was created in a makeshift lab over 2,000 years ago by some sort of head of their time genius scientist. However, that is not entirely accurate.

Rather than genetically modifying an existing plant, broccoli was created through selective breeding.

Selective breeding (also known as artificial selection) is the practice of creating a better version of a plant with desirable characteristics by propagating plants with desirable qualities under controlled conditions.

For example, if a plant’s fruit is larger, healthier, and more delicious than others of the same species, or if it produces more crops per year, selective breeding is used to try to duplicate that plant in order to create future harvests with superior edible plants.

The most common application of artificial plant selection is to obtain plants with greater disease, pest, or crop tolerance, such as lower temperatures, drought, and extreme weather. Plant duplication can be accomplished through a variety of methods, including seed harvesting from the target plants and propagation via cuttings, grafting, layering, and other methods.

However, it appears that Roman farmers did not have a time constraint when developing broccoli through selective breeding. Broccoli was created after decades of selective breeding of the Brassica oleracea plant (also known as wild cabbage or wild mustard). The wild cabbage plant is native to the Atlantic and Mediterranean coasts of Europe.

Although broccoli is the ancestor of brassica oleracea, it is not the only plant derived from this species. Indeed, as a result of ongoing selection, many distinct types have emerged, including:

The Benefits of Broccoli

Broccoli is a low-calorie, high-fiber vegetable rich in antioxidants, proteins, vitamins, and minerals. Broccoli was ranked third among the “Healthiest Vegetables on Earth” by Healthline in 2017. Spinach and carrots are the first and second most popular vegetables, respectively.

Broccoli contains several antioxidants that help to protect the body from free radicals. Broccoli also contains beta-carotene and vitamin C, which are both powerful antioxidants that the body can convert into other nutrients (such as vitamin A). These compounds may reduce your risk of heart disease and certain cancers, such as breast and colon cancer. They may also help people with arthritis or asthma reduce inflammation.

According to the USDA National Nutrient Database for Standard Reference, one cup of cooked broccoli contains about five grams of fiber. Fiber is an important part of any diet because it helps you stay regular, prevents constipation, lowers blood cholesterol levels, normalizes blood sugar levels, and makes you feel fuller for longer.

Broccoli is high in protein, with three grams per cup (cooked). It also contains thiamin, riboflavin, and niacin, among other B vitamins. These nutrients aid in increasing energy levels, converting carbohydrates into fuel for the body, building muscles, maintaining skin health, and regulating brain function. They may even lower cholesterol levels in people with high blood pressure or type II diabetes, both of which can lead to heart disease if left untreated.

Broccoli contains a variety of minerals, including potassium, phosphorus (for bone formation), magnesium (involved in over 300 reactions in the body), zinc, iron, calcium (for bone health), manganese, selenium (an important antioxidant), and copper.

Can Consuming Too Much Broccoli Be Harmful?

Broccoli is generally safe to consume in large quantities. However, certain properties may cause adverse reactions in some people, particularly those with thyroid or kidney issues. Some examples are:

Is it Safe to Eat Genetically Modified Broccoli?

Broccoli is high in vitamin C, fiber, and a variety of other vitamins and minerals. It also contains cancer-fighting chemicals (such as sulforaphane) and may help to protect against heart disease. Broccoli has traditionally been used in folk medicine to treat indigestion and constipation, as well as to improve liver health. Due to the nutritional value of broccoli, few to no side effects have been reported.

While genetically modified organisms (GMOs) or GMO crops are grown in the United States and the United Kingdom, they are not widely available in grocery stores due to public concern about their safety. That being said, you shouldn’t be concerned about broccoli because it was created through years of selective breeding rather than being genetically modified.

As more people become aware that broccoli is produced, a debate over whether it is safe to consume these crops and whether a broccoli plant is beneficial to us has begun.

There are still many questions and unknowns in the case of genetically modified plants, but in the case of broccoli, it is much easier to believe that it is completely safe to eat due to how it was produced.

There are several other species, such as broccoli and other Brassica oleracea hybrids, that have been developed through selective breeding to achieve the form we are all familiar with, so let’s look at a few of them:

Numerous other plants have resulted from selective breeding:

Is broccoli grown in a lab? The decision has been made! Without a doubt, broccoli is a man-made plant that was created through a meticulous process of selective breeding.

There can be broccoli without humans! We also give credit to nature because, after selective breeding, these vegetables have gone through thousands of years of modifications to become what we know now.

We hope that this information has been useful and that all of your questions have been answered. So, eat some nutritious broccoli!