When you go to IKEA, you rarely think of food. To be honest, food might be one of the last things on your IKEA shopping list. Yet, once you are inside a shop of the Swedish retailer, you start thinking about food. Maybe because all that walking around can make you feel tired and hungry. With that in mind, today, we will talk about IKEA cinnamon rolls. Yes, that delicious treat you can get inside an IKEA shop.

As you get out of an IKEA shop, suddenly, that conveniently located Exit Cafe looks amazing. Per the statement of the company, IKEA Exit Cafe offers a modern taste of Sweden with honest, affordable, and appetizing food. There, you can find delicious options like Swedish meatballs, cakes, coffee, hot dog, and of course, IKEA cinnamon rolls.

Once you spend $50 on a lamp, spending a few more bucks on a tasty treat looks convenient. The cinnamon rolls might not be the biggest ones you have tried. After all, they are about the size of a thick slice of bread. But they are tasty, highly caloric, and amazing to be honest.

When you think about treats, you often think of their caloric value. We said before that IKEA cinnamon rolls are highly caloric. Just how high?

Well, here are some nutrition facts about them. Per several sources, they pack between 300 and 400 calories. Some sources say higher than 300, others around 300. Here are some other facts:

Why are they so popular?

As we said before, IKEA cinnamon buns are quite popular. The Swedish retailer sells around 500,000 per year. Why are they so popular? Well, think about this for a second. You go to IKEA, you get tired of all that walking, and you spend hundreds of dollars on furniture items. What is a buck or two for a tasty sweet treat?

Right? We all get hungry after walking for hours in IKEA. And we deserve something tasty to end our trip. Let’s be honest. People who grab the cinnamon rolls know they are not getting a nourishing snack.

Yes, they do pack around 400 calories per Swedish cinnamon roll. There are also better alternatives at the check-out exit café. For example, a cone of frozen yogurt, which has fewer calories.

Or, if you like, you can share with friends. Simply cut the cinnamon bun into two or four pieces, and share with your shopping buddy, friends, loved one, or kids. And then you get a reasonable snack amount.

Ingredients and How to Prepare

Now, how to prepare these frozen cinnamon buns? Simple, just heat your oven up to 170 or 190 Celsius (340 to 370 Fahrenheit). Then, place the frozen buns directly on a baking tray and bake in the middle of the oven for 15 minutes.

How to prepare IKEA-inspired cinnamon rolls

Let’s be honest, there are hundreds of cinnamon roll recipes out there. You can also find many recipes for sticky buns, which is their doughier and caramel-coated sister.

Most recipes require time for the dough to rise. If you love fresh bread and enjoy baking, then you will love this recipe for IKEA cinnamon rolls fresh out of your oven.

Now, why would you try to improve something that is already delicious? Well, let’s be honest, IKEA rolls can be bready. And you can make a lot healthier version of the popular treats.

You will need only 30 minutes of baking at most, and your house will smell of cinnamon and warm rolls. And, here is a dirty little secret, they will taste better than those you can buy for a few dollars at the IKEA Exit Café. 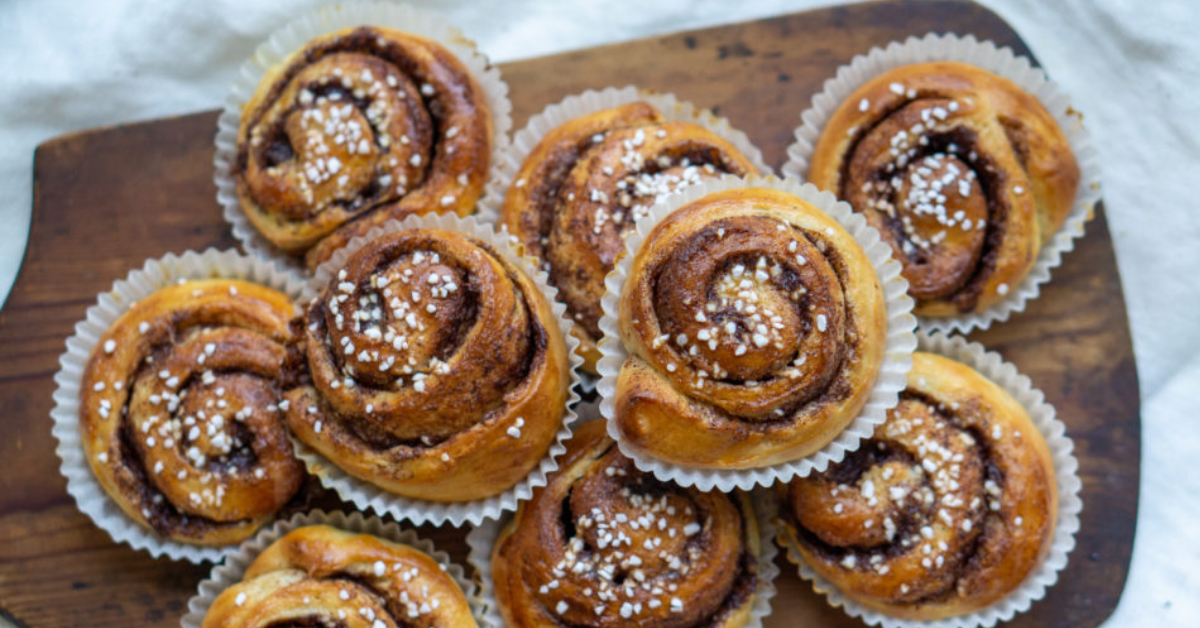 How to make it?