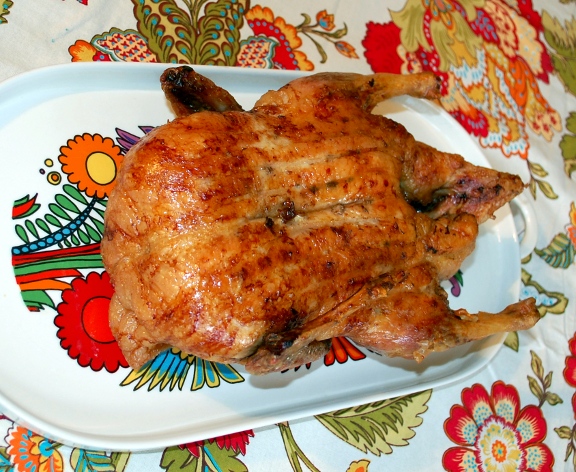 I was trying to take a good picture of this duck, but my battery died, so this is the best I got. Nevertheless, it was perfectly cooked with crispy skin on the outside and moist meat on the inside.
Some people are intimidated by cooking duck, if for no other reason than people are no longer exposed to meats that used to be common in the U.S. (rabbit, lamb, etc.), and so they seem exotic and difficult. But have no fear, duck is extremely easy to cook. It is a lot like roasting a chicken. And, like a chicken, all the parts of a duck are useful. You can use the bones, giblets, and neck to make broth and you can use the fat to make duck confit.
The main difference between a duck and a chicken is that duck has a layer of fat around its body that a chicken doesn’t have. That means you have to take more time to cook the duck–in this case, 4 hours–and you have to get the duck to release the fat while cooking. I did this by pricking the duck so that as it slowly roasted at a low temperature, the fat released from the bird and the skin became crispy. I also cooked the duck upside down so that as the pan filled with fat, the skin cooked in it, adding to the crispiness. At the end, I turned the duck over so that the skin on the breast could finish browning in the oven.
Here’s the recipe:

How To Roast A Duck
Ingredients:

Directions:
Preheat the oven to 250 degrees.
Wash the raw duck and pat dry. Remove the neck and giblets from the duck and freeze for broth. (Sometimes you will have to cut the neck off the duck–get a cleaver and chop it off, then freeze as normal.)
Rub the inside and outside of the duck with salt.
With a knife or skewer, prick the duck all over so that it will release fat while cooking. Hold the knife parallel to the duck and shallowly insert into the fat, being careful not to go all the way through to the meat.
Place the duck breast-side down in a large pan. Put in the oven and roast for about 3 hours, checking periodically to make sure it is releasing the fat. If not, prick a few more times.
After 3 hours, turn the duck over so that it is breast-side-up and increase the heat in the oven to 350 degrees. Cook for another 45 minutes or until the skin is nice and crispy and the internal temperature is 170-180 degrees.
Remove from the oven and let rest for about 10 minutes before serving. Enjoy!

2 thoughts on “How To Roast A Duck”