This year I have been dealing with an infestation of voles in my garden. As I said before, I believe this is a result of sheet mulching–the layers of paper and mulch made a cover of protection that the voles were attracted to.

Voles are mouselike rodents that burrow underground and eat plants by the roots. They can be extremely destructive.

Here is a list of all the plants they ate:

On top of that, they did damage to the tomatoes and basil, since in addition to eating plants from underground, they climb out and sever branches from plants too. They even managed to harm plants they don’t eat, because the burrowing did damage to the roots.

I cannot tell you the frustration this situation has caused me. There is nothing worse than walking out to water your plants and seeing your four-foot tall plant loaded with baby squash lying dead on the ground because rodents ate its roots.

Voles are worse than gophers. Like gophers, they make a home in your garden and eat the plants from underneath, but there is only one gopher per tunnel, where there can be 30 voles living in a tunnel. If you kill a gopher, you’ve killed it, whereas with the voles, you kill one and there are 29 others waiting to take its place.

In addition, you can see gopher holes, where with many types of voles, you can’t see their burrows and have no idea they are there until they kill your plants. They hate having open tunnels, so if you open one up, they will not only close it again, they will fill it in with dirt. This can make it hard to find the tunnel again.

Oh, and did I mention that voles are nocturnal? Yeah, that doesn’t help either.

I struggled with this all summer. I wouldn’t say I’m an expert, but after trying many methods, I did get control of the situation. (Knock wood.) Here is what I did:

I tried flooding them out. I have had a lot of luck with flooding gophers, but with the voles, flooding only killed one that I know of. Well actually, it didn’t even kill him, just forced him out of his hole. Here is a picture I took of him: 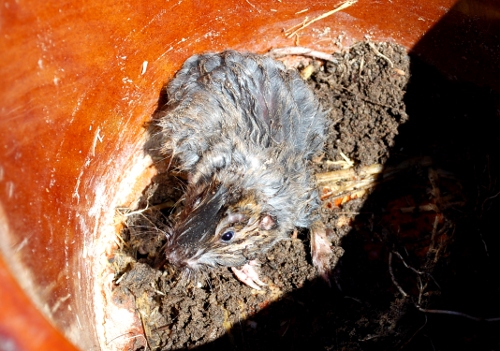 (Looks so cute and innocent, doesn’t he? I let him go in the woods down the street from my house because I am a big ol’ softy.)

Flooding did let me understand the extent of the vole tunnels. Because voles have shallow tunnels, the water clearly marked where they were digging, and I discovered that the tunnels went all through my yard, under the concrete driveway and into my neighbor’s yard.

This was good information, but it also showed that I couldn’t get to the entrance of their burrow since it was under the neighbor’s shed. Annoying little buggers!

Next I tried trapping the voles. Everyone I talked to said to trap. I even asked my local master gardeners, and here is what they told me:

Try peanut butter, oatmeal or apple slices in your traps. Placement is crucial, right angles to runways, a minimum of 12 traps for a small garden is required. Persistence is your best weapon.

I followed these instructions to the letter. I dug around until I found a hole–which is filthy, frustrating work–then I put oatmeal and peanut butter on a trap, put it down at a right angle to the hole. I did this repeatedly.

I did not catch a single freaking vole this way.

Once the voles figured out what the traps were, they didn’t go near them, but just kicked dirt on them. Voles are not stupid animals.

Two things I tried helped, however. One was removing all the sheet mulch from my garden. I was loathe to do this because, as I mentioned in the this post, it is a lot of work to put the sheet mulch in.

However, the local master garderner told me that, “Voles love the cover and don’t like to cross bare ground or feed in the open.” This seemed to be true. When I pulled out the sheet mulching, I noticed a reduction in vole activity in that area.

The other thing that helped was using a nontoxic deterrent around plants. In this case, the voles had eaten four of my five squash plants and I could tell they would go for the last zucchini next. So I used Gopher Max repellent around the plant. 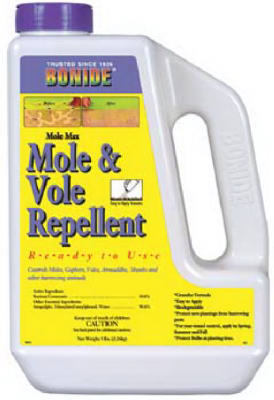 I know it worked because my cats heard the voles moving away from the zucchini when I applied the repellent. They have since left that plant alone.

But repellent didn’t solve the problem. Yes, it saved the zucchini, but the voles were still there and they were steadily destroying my garden. I needed a stronger method.

I couldn’t use poison because this was in a vegetable garden, so I finally bought a Crittergetter, which allows you to pump car exhaust into the vole’s burrow.

Believe me, I wouldn’t have resorted to this if I weren’t desperate.

The way it works is, you attach a long, balloon-like tube to your car exhaust and insert the other end of the burrow. Then you run your car for 15 minutes and the exhaust goes through their burrow and kills the voles in their sleep. It’s a pretty humane method, overall.

And it worked. We had to do it a couple of times, but the voles slowly stopped filling in their holes (a sign they were dead) and slowly started leaving the plants alone. I now am fairly confident that I will have some melons and pumpkins this fall.

However, I put all my fall plants in containers where the voles can’t get to them. Next year, we are going to lay wire down and put in a raised bed. That way I don’t ever have to deal with voles or gophers again.

What didn’t work for voles:

What did work for voles:

I would love to hear your thoughts on voles. How have you dealt with them?

28 thoughts on “How To Remove Voles From Your Garden”