Duck confit is a French dish where duck is cured in salt and poached in fat. It has long been one of my favorite dishes, so I decided to make it myself.

I adapted a recipe from Charcuterie: The Craft of Salting, Smoking, and Curing by Michael Ruhlman and Brian Polcyn. It took nine days to make. The end result was delicious.

I will admit, though, that preserving meat in fat can be a gross. After making my own duck confit, I’m now very aware of just how much fat goes into making the meat taste so good. 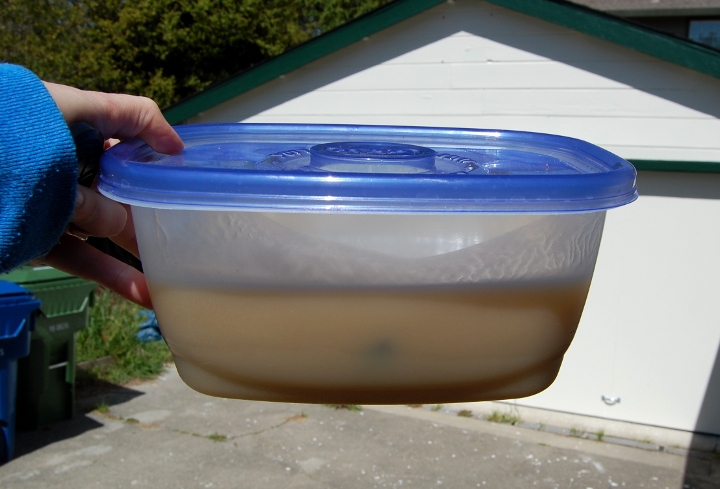 (The black spot in the fat is a clove.)

Last December, I cooked a goose for the first time. After dinner, I saved the fat from the goose and used that for the duck confit. If you don’t want to go to that much trouble, you can look into getting fat from your local butcher.

I also butchered a duck for this recipe. I’m not going to tell you how to do that part because it’s annoying. If this is your first time making duck confit, I recommend buying a duck that has already been cut up for you. But if you want to butcher the duck yourself, here’s a how-to.

Remove the fat from the duck by carefully pulling it off the muscle. It comes up pretty easily with a little bit of slicing here and there. There’s a membrane underneath the fat that has to be cut away too. Save the fat for later. (I stuck it in a plastic bag and put it in the freezer.)

Cover the duck legs with salt and put them in a bowl. 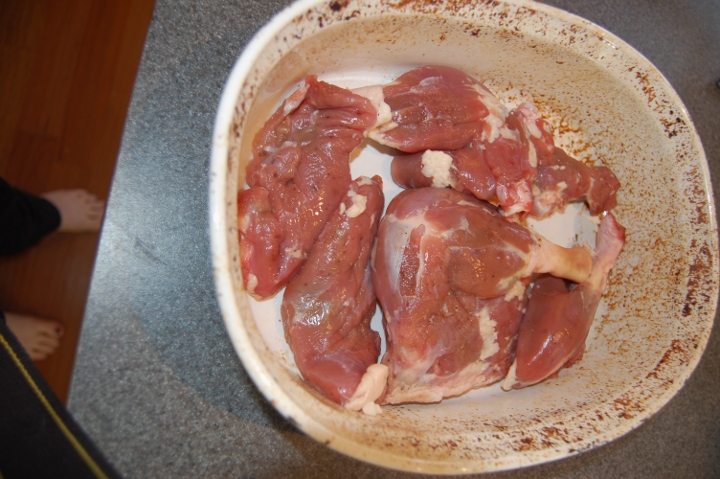 Crush the peppercorns and cloves and sprinkle them over the duck. Break up the bay leaves, slice the garlic, and press them into each duck leg. Cover and put in the refrigerator overnight.

The next day, rinse the salt from the duck. Pat dry.

Prepare the fat to put over the duck. In this case, I took the goose fat out of the freezer and let it sit on the counter until it became room temperature and was soft enough to be poured. If you are using the fat from the duck itself, you will have to render it. It’s not hard–here’s how.

Now it’s time to poach the duck. This takes 6-10 hours, so start in the morning. Lay your duck in a baking pan or Dutch oven. Pour the fat over the duck so that it is completely covered. Pre-heat the oven to 180 degrees (200 degrees also works) and stick the duck in.

Let the duck stay in the oven all day, until the meat is tender and the fat becomes clear. Your house will smell wonderful. When it comes out of the oven, it looks like this: 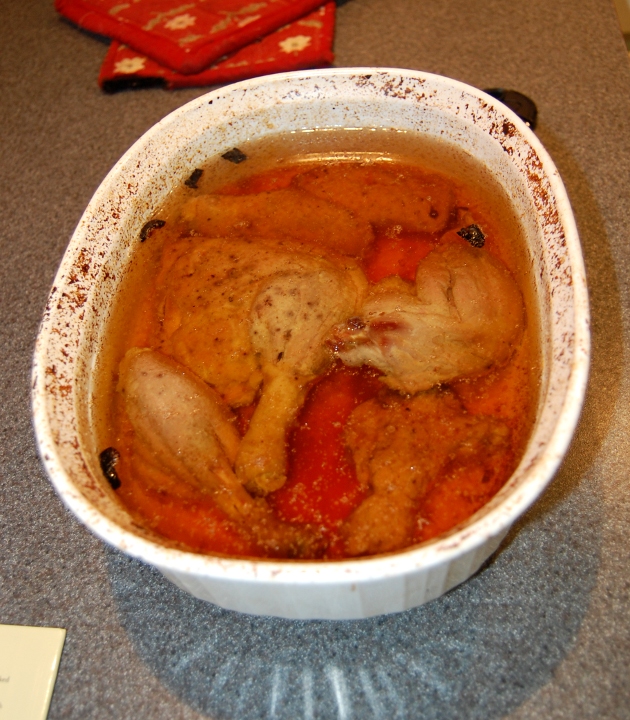 So now you have poached the duck in fat, and you could put it in the fridge overnight and eat it the next day. But I understand that most chefs let the duck confit sit in the fat for at least a week so that all the flavors gel, so that is what I did. Once the duck confit cooled, I covered it with plastic wrap and put it into the fridge for a week.

It was rather alarming at this stage, since every time I opened the refrigerator, I was confronted with a block of fat: 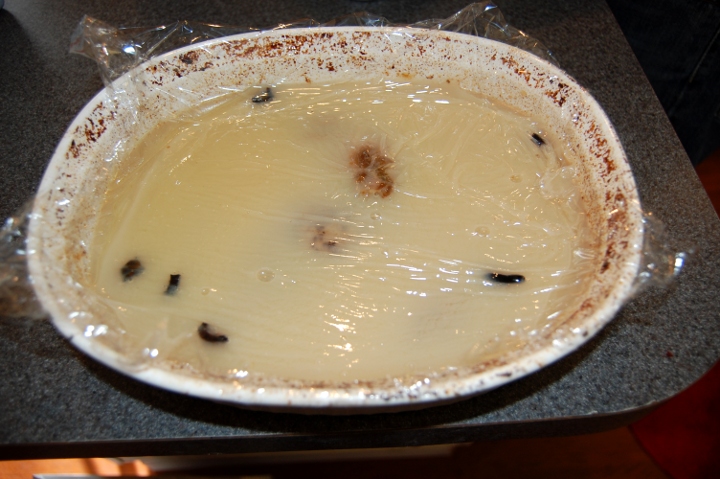 (Again, the black spots are cloves.)

A week later, it’s finally time to eat the duck confit. A few hours before serving, remove the duck from the fridge and sit on the counter so that the fat softens.

Preheat the oven to 425 degrees. While it is pre-heating, get out a frying pan and gently fry the outside of the duck to get a crispy surface. Be careful, the meat is very tender. You may have to use a little olive oil here, believe it or not.

Transfer the duck to a baking pan and cook in the oven for 15 minutes until warmed through. 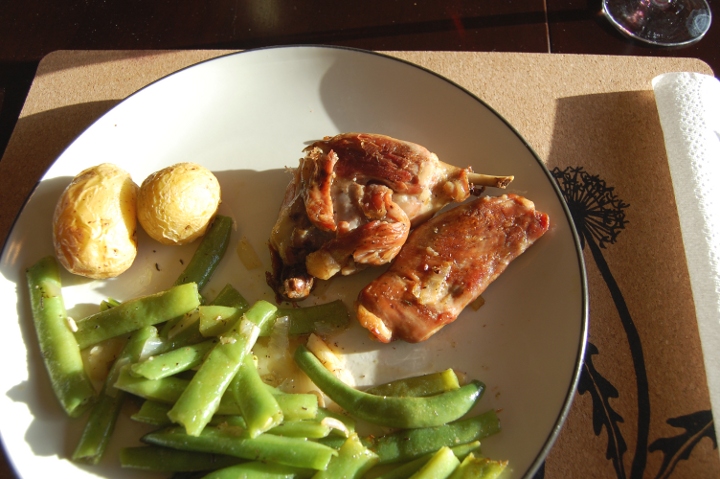 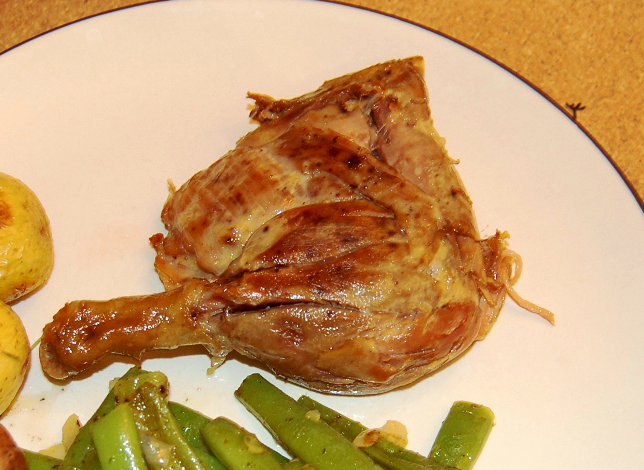 I’m glad I did this. It tasted great and I learned a lot. The only hard part was cutting up the duck, which I could have avoided by buying them pre-cut. Lesson learned.

2 thoughts on “How To Make Duck Confit”