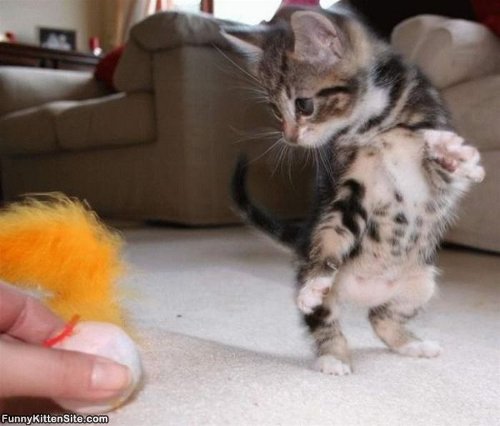 Following up the post about How To Make Your Own Cat Scratcher: there’s nothing more annoying than buying or making a cat scratcher when they refuse to go near it. Even worse is when your cat prefers to scratch on the sofa instead of the scratching post.
The good news is that cats can be trained. Like dogs, bad behavior can be broken and good behavior can be introduced.
Cats scratch to sharpen their claws and mark their territory. When they scratch, not only are they leaving visible evidence they were there, they are leaving behind a scent pheromone that other cats can smell. It’s a way of saying, “This is my spot, I own it.”
The key to getting them to use the cat scratcher to make clear that they have a spot in the house that they “own” for scratching, but only one place. And that’s not as hard to do as some people think.
Here are some tips to get a cat to use a scratcher:
1. Play with the cat around the scratcher. Wiggle a toy near the scratcher so that the cat claws on it. A few times of this and the cat will start to associate the scratcher with play.
2. Put catnip on the scratcher. Sprinkle a bit of catnip around the scratcher and the cat will want to go near it more and associate it as a fun, good place.

3. Reinforce that the scratcher is the only place where scratching is allowed. If you catch your cat scratching on your carpet or furniture, tell him no (or spray with a water bottle) and then pick him up and move him to the scratcher. A few times of this and he will start to understand that this is the place he is allowed to go for scratching.
4. Praise the cat for using the scratcher. Saying “good kitty” or “good boy/girl” goes a long way with cats. They respond better to positive reinforcement than punishment. Believe it or not, they do want to please you.
5. Remove pheromones. The above tips should be enough for most cats. However if you have a bad scratching problem, it’s important to remove the cat’s pheromones from the old place they scratch and put them in the new place. There are products you can buy in the pet store that mask the pheromone smell. I’ve used them and they work. If you apply the spray to the old place and follow the above steps consistently, your cat should start to use the scratcher exclusively.
Well, most of the time, anyway. You know how cats are.
Those are my tips. What has worked for you?