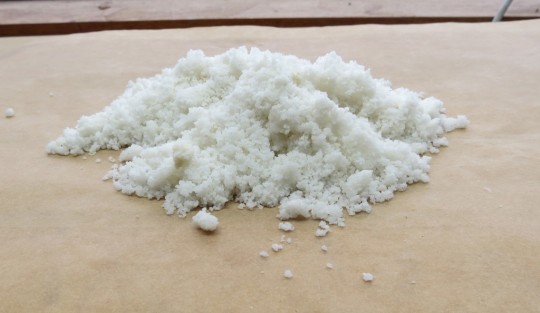 Living on the California coast, I have thought once or twice about harvesting my own salt from the ocean. I haven’t tried it, mostly because I suspect that the amount of effort and money spent on electricity would be higher than just buying salt in the store.
Then I ran into this video about Ben Jacobsen of Jacobsen Salt in Oregon. His passion about salt harvesting reawakened my interest in harvesting salt from the ocean.

Now I’m curious. I haven’t harvested my own salt yet, but maybe I will. It looks easy.
According to Wikihow and posts like this, harvesting salt takes:
1. Collecting clean salt water in jugs or a cooler.
2. Running the water through a cheesecloth to get rid of seaweed/other particles.
3. Slowly evaporating the water over many hours, usually in an oven or on a stove top set on low heat.
4. Collecting the salt crystals.
A gallon of water will produce between 3-8 ounces of salt, depending on salinity. To make it worthwhile, you probably want to do a lot of water.
Here’s a video that shows the whole process from start to finish: