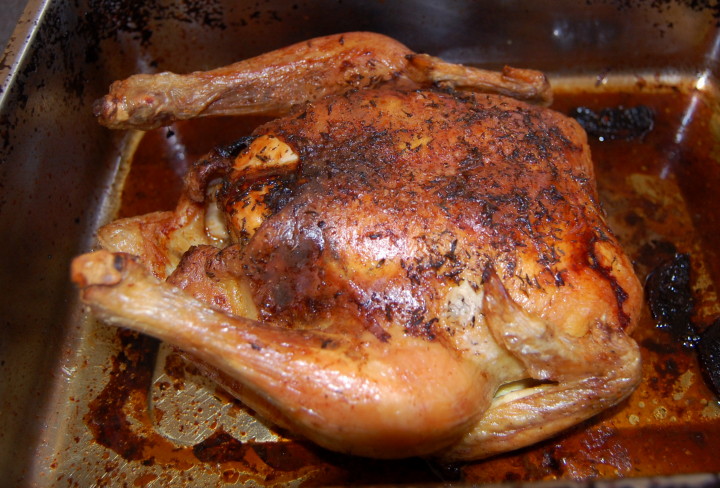 Last week my food budget felt tight, so I roasted a chicken. One whole chicken is enough for my husband and I to eat on for the entire week. That’s right, I get a week worth of dinners out of one chicken. And the best part is that chicken is so versatile, it doesn’t feel like you are eating the same thing over and over again.
I buy whole chickens when they are one sale. This one was $.79 a pound, which added up to $4.22. I used every part of the chicken, even the bones and the gizzard, as well the ends of all the vegetables I encountered during the week. In the end, I got six meals out of the chicken, if you count the chicken broth. The total cost? $8.48.
Here is how I did it:
Monday Night: Roast Chicken with Potatoes and Steamed Broccoli: $5.41

After the chicken came out of the oven, I cut some slices off the breast and served them with lightly salted steamed broccoli and a baked potato.

I cut up the lettuce, added the other vegetables, and mixed them with the oil and vinegar/salt and pepper. Then I put the croûtons and the rest of the chicken breast on top.

In a frying pan, I cooked the onions, tomatoes, beans, and chicken in oil with the taco seasoning. I added this mixture and cheese to the tortillas, rolled them, and cooked them in the oven for 15 minutes. I served it with mashed avocado.

I made the crust in a pie pan. Then I cooked an onion, carrot, and the rest of the broccoli in oil. Then I made a cream sauce with butter, flour, and milk. When that was done, I combined the sauce, the rest of the chicken, and vegetables in the crust, finished the pie, and cooked it in the oven until the crust was done and the sauce was bubbling. The resulting pie makes enough for two dinners.

Saturday: Chicken Broth (In reality I didn’t really eat this on Saturday—we went out to dinner. But you could.): $.10
Chicken bones/gizzard/neck plus:

The ends of the Onions/Carrots/Broccoli: free
Water: free
Spices: $.10

I boiled all the above in water until it turned into broth. If I had wanted to, I could have made soup out of it, but I chose to freeze it for future use.

Total spent on all the dinners: $8.48
If I were doing this in the summer, that number would be even lower because the carrots, potatoes, onion, lettuce, and radishes would be from the garden. (That would make the total cost: $7.09)
So there you have it. Chicken = the most frugal food ever.