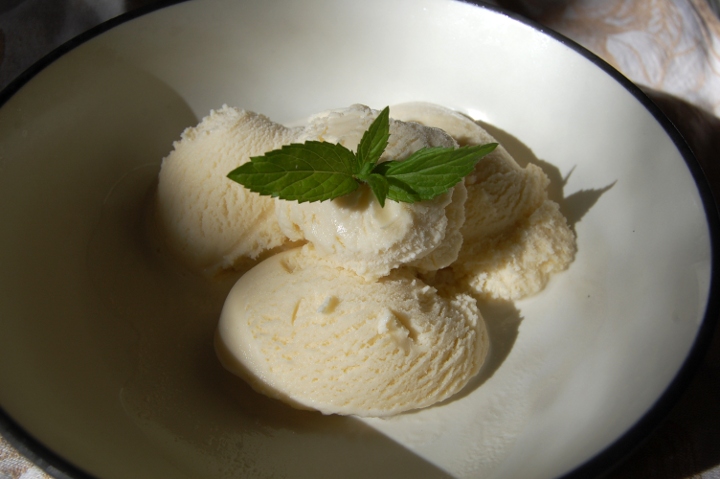 I decided to experiment with ice cream flavors this summer. First up: bourbon ice cream.
And it was great. In fact, I will cut to the chase right now and say that if you like bourbon and ice cream, you should try this recipe.
The challenge here is that alcohol doesn’t freeze in your average freezer, so I had to figure out a way to get the bourbon into the ice cream and still have it freeze. 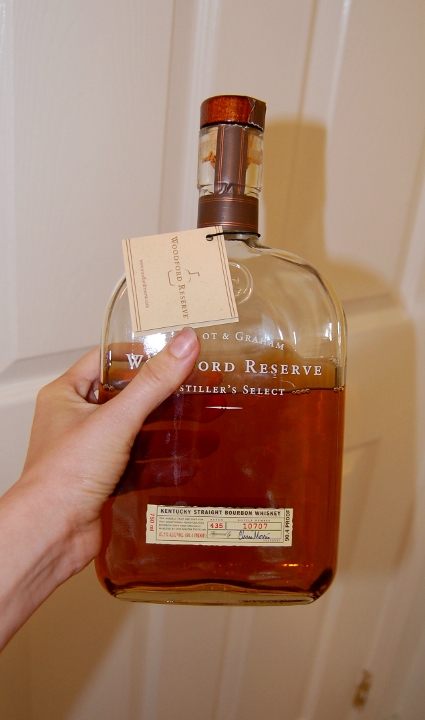 I started with the above Woodford Reserve Bourbon and made a bourbon syrup. I combined sugar and bourbon together in a pan and simmered for 3-4 minutes until it became thick and heavy. By doing this, most of the alcohol evaporated into the air, leaving behind a syrup. Then I combined the syrup with the rest of the ice cream batter and put it through an ice cream machine.
The result is delicious! It’s rich and creamy while still maintaining the caramel and oaky notes of the bourbon. I can see a lot of potential here–chocolate and bourbon ice cream, bourbon ice cream with peaches, mint julep ice cream, bourbon ice cream root beer floats…
One question remains: Is this ice cream alcoholic? Yes, there’s still a little bit of alcohol in the ice cream, although it’s no where near the 40% that was originally in the bourbon. It’s not going to get you drunk though, unless you eat a ton of it. I don’t recommend it for children. 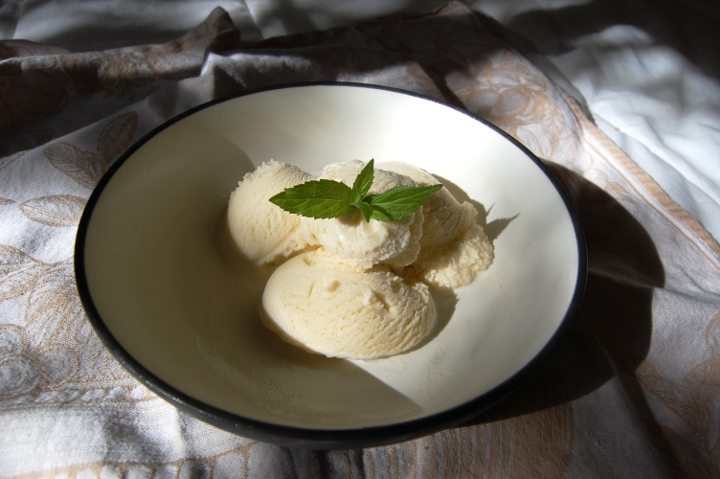 Directions:
First, make the bourbon syrup. In a pan, combine the sugar and the bourbon. Stir rapidly over medium-high heat so that all the sugar dissolves. Then continue to stir as the mixture begins to boil rapidly. A steam will rise from the pan that smells like bourbon–most of that is the alcohol leaving the pot.
You will want to stir for about 3-4 minutes or until the syrup begins to thicken. You want a thick consistency, but not too thick–you are not making candy here. When the syrup dribbles off the spoon a little more slowly and is thick to the eye, turn off the heat.
Put the syrup in the fridge for at least 4 hours, until cold.
Now make the batter. Remove the bourbon syrup from the fridge. It will be hardened from the cold, but that’s fine. Break two eggs right on top of the bourbon syrup. Using an egg beater, beat the eggs and syrup together until they are completely integrated. Add the milk and whip cream and beat them in too. Make sure the syrup is completely dissolved into the ice cream batter.
Cover the batter with plastic wrap and put it in the fridge for at least 8 hours. You want the batter very cold. Then make the ice cream by running the batter through an ice cream machine. Mine took 40 minutes to form.
That’s it!