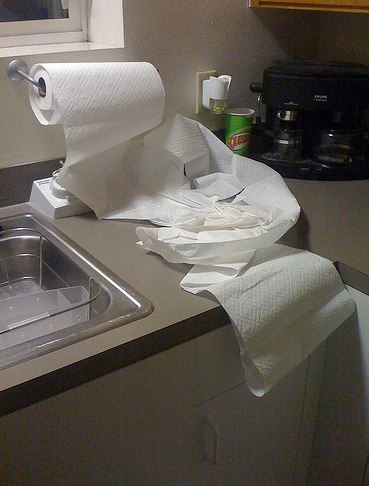 There is a free idea for any of your inventors out there. I will be your first customer.

Paper towels are useful. They serve certain functions that dish rags don’t. For example, I would rather wipe my mouth with a paper towel than a dish rag. I don’t like cleaning a toilet with a dish rag because afterwards, I have this icky rag I have to contend with. I would rather throw away a used paper towel and be done with it.

However, there’s no doubt that paper towels are expensive and bad for the environment. To balance these two issues, I have adopted a system that prolongs the life of my paper towels. As a result, I only buy them once or twice a year.

Here is five tips for saving money on paper towels:

1. Whenever Possible, Use Cloth.

Although nothing beats a paper towel for certain circumstances, for most others, dish rags work great. To determine this yourself, try going without paper towels for a week or two and see when you really miss them. Then make a rule to use paper towels only in those situations, and use dish rags the rest of the time.
Incidentally, I don’t buy dish rags, I cut up old clothes or use old washcloths instead.

Buying paper towels is surprisingly complicated. There are different numbers of rolls in a package and different amounts of square feet on every roll, so the cheapest price may not be the best deal. The best way to determine what to buy is to compare apples to apples based on the price per square foot. To do this, divide the price by the number of square feet listed on the package. So if a 100 square foot package of paper towels is $5, you would divide $5 by 100 and end up with $.05 per square foot. If you do that with the different packages–the cheapest ones versus the ones on sale, and so on–you will find the lowest price per square foot of paper towel. That is the one to buy.

BUT buying the cheapest brand can backfire. It is true that very cheap paper towels (Walmart’s brand, for example) don’t absorb well, which means you end up using more of them, going through the roll faster, and losing the money you thought you were saving by buying the cheapest price per square foot. Consumer Reports did an test on paper towels and found that Bounty Extra Soft, Walgreens Ultra Quilted, CVS Big Quilts, Kirkland Signature from Costco (which is what I usually use), and Up & Up from Target had the best absorbency. I generally believe in buying the cheapest roll of paper towels unless a brand has proven itself to be bad.

Weirdly enough, most paper towels get used at least twice in my house. I find that most paper towels are capable of several uses before they are spent, so after dinner, I snag the paper towels from the table and toss them in a container to re-use. I will re-use a paper towel before I get out a clean dish rag. I figure this saves a little bit of money because dish rags cost money to wash and the paper towel is going into the garbage either way.

I recently learned that you can use paper bags to absorb bacon grease. I always have small paper bags around from the store, so I’m going to try this next time I cook bacon. Another common paper towel alternative is to use newspaper to clean windows. I don’t do that, but some people swear by it. I have also heard of people using paper napkins to clean instead of paper towels since they are (supposedly) cheaper. I think your absorbency issue would come to play here–napkins don’t absorb as well, so you would use more of them. Anyway, the point is, examine every use and look for alternatives. There are a surprising number of them when you start looking around.

How do you save money on paper towels?

6 thoughts on “5 Ways To Save Money On Paper Towels”