My fridge is jammed with vegetables from my garden right now. We’ve been eating like kings for very little money. There’s a reason they say the living is easy during the summer.
Here’s some dinners I’ve had lately that have been vegetable heavy that I heartily recommend.
Ratatouille 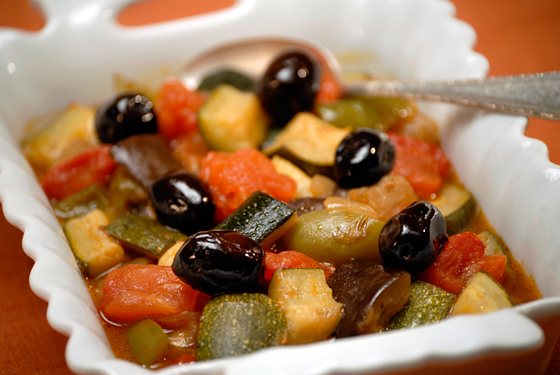 I had never made ratatouille before and was doubtful I would like it. I was wrong. Ratatouille is AWESOME. I made Jacques Pepin’s recipe and served it on the side of red snapper en Papillote, along with some nice bread and wine.
The thing is, I didn’t care about the fish because the ratatouille was so good. I just wanted to eat more and more of it. And it takes a tons of veggies: eggplant, tomatoes, garlic, onions, zucchini, olives, and peppers. Because most of the veggies were from my garden, the only things I bought for the ratatouille were the eggplant, olives, and olive oil.

Lamb Kebabs With Sides Of Sauteed Chard and Caprese Salad 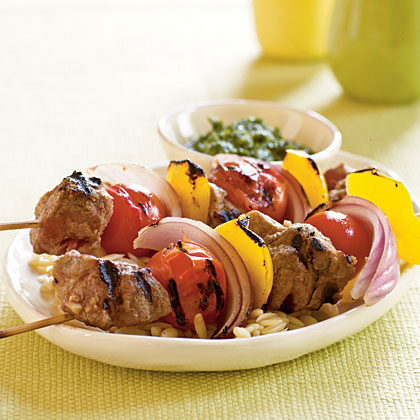 This was one of those “riches of summer” meals where you really feel the season. I marinated cubed lamb in a way similar to this recipe, using all herbs from the garden. Then put them on skewers with sliced fennel bulb and zucchini from the–you guessed it!–garden. While Mr. Savvy grilled the kebabs, I sauteed fresh chard (garden) with garlic, onion, feta, pecans, and a slight squeeze of lemon (garden). Then I made a Caprese salad, using tomatoes (garden), basil (garden), and fresh mozzarella. It was a lovely dinner. 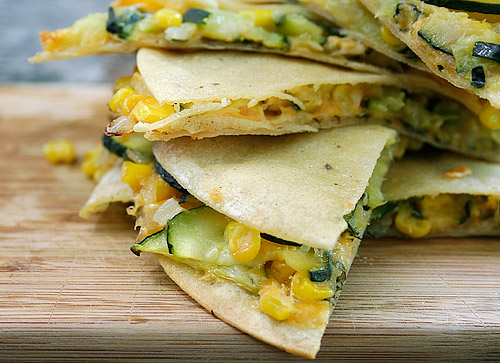 [Image From Ezra Pound Cake]
This was a big hit. It’s a cheese quesadilla with zucchini (garden), onions, and corn in it. (Canned corn worked great, but it’s easy to get fresh right now.) I used Martha Stewart’s recipe. Then we ate them with my version of easy guacamole: mash up an avocado and sprinkle in a little bit of salt and pepper in it. 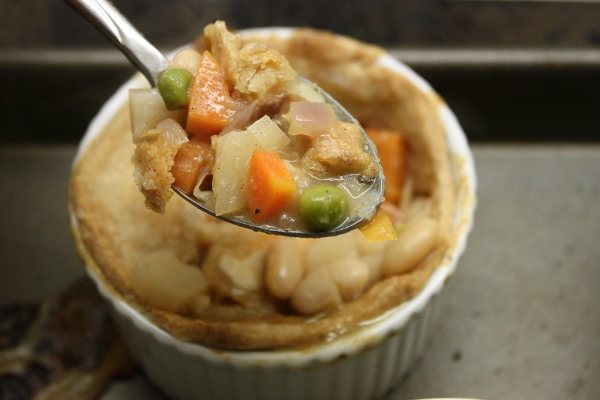 You can make a Vegetable Pot Pie on a Monday and get a couple of dinners or lunches out of it. I have my own recipe that I’ll eventually share, but in the meantime, this recipe looks pretty decent. My veggie pot pie had zucchini, carrots, green beans, onions, garlic, (all garden) and mushrooms.
Fettuccine with Sausage, Basil, and Sun-dried Tomatoes 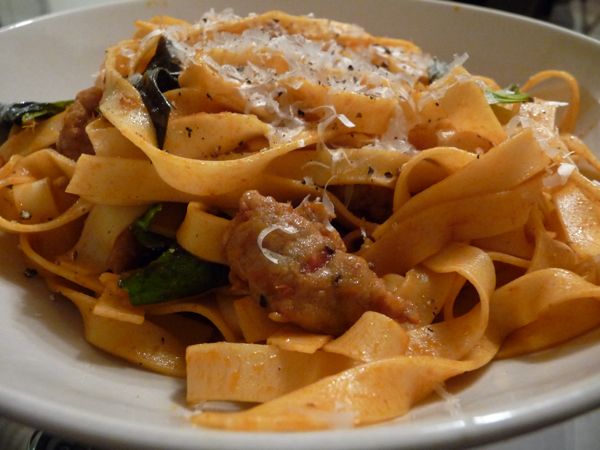 I made fresh fettuccine with my pasta machine and tossed it with Mario Batli’s sauce of sausage (homemade), basil (garden), and sun-dried tomatoes (leftover from last year’s garden). There’s nothing like fresh pasta.
Yep. We’re eating well around here.
And we’re not done yet. Here are some upcoming vegetable entrees I have planned:

Creamy Risotto with Vegetables. (Not sure what kind yet.)
Carrot Gnocchi with Green Beans and Corn. (I’ll probably put this recipe up soon.)
Sweet Potatoes Stuffed with White Beans And Chard. (Featured in my recent chard post.)
Tomato Tart
Penne with Cherry Tomatoes, Basil, and Mozzarella (Uses fresh basil and tomatoes, both things I have in abundance around here.)