My orange tree is giving me a lot of oranges this year, so I decided to make orange marmalade. I’m pleased with how it came out. 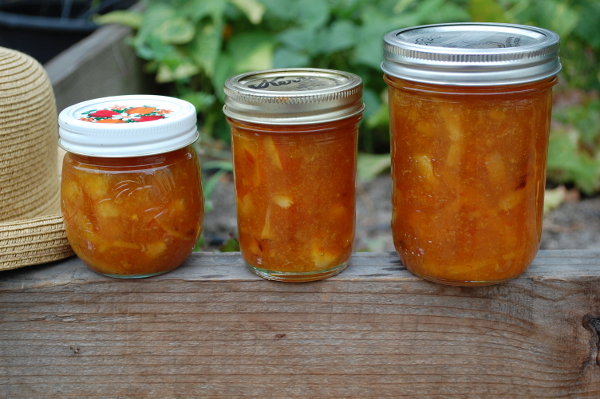 I used Alton Brown’s recipe, except I reduced the amount of sugar in it. His recipe calls for about 7 cups of sugar, which seemed like way too much. I cut it in half to 3.5 cups and it tastes perfect to me. Here’s the recipe:

Put the oranges in a stainless steel pot. Add the lemon juice and zest. Bring to a boil, which will take about 10 minutes. Once boiling, reduce the heat so that the marmalade is at a rapid simmer. Cook for 40 minutes, stirring periodically so it doesn’t burn. The fruit should be very soft.

Sanitize your jars. Here’s how Alton says to do it: “While the fruit is cooking, fill a large pot (at least 12-quart) 3/4 full with water, set over high heat and bring to a boil. Place 10 (8-ounce) jars and rings, canning funnel, ladle, and tongs into the boiling water and make sure the water covers the jars by at least an inch. Boil for 10 minutes. Turn off the heat, add the lids and leave everything in the pot until the marmalade is ready.”

Put a plate in the freezer. When the 40 minutes are up, bring the marmalade back to a boil. Add the sugar. Carefully taste to see if you like how sweet/bitter the marmalade will be. Adjust accordingly.

Stir the mixture continually until the marmalade darkens in color and it reaches 222 degrees F on a candy thermometer. This will take about 15-20 minutes.

Transfer the marmalade into the jars. Put on the lids and rims. Tighten and wipe away any spillage with a damp cloth.

To finish the marmalade, put the jars into boiling water and boil for 10 minutes. Remove from the water and let the cans sit at room temperature for at least 24 hours before opening.

Voila! Marmalade. You can store it for up to 6 months.