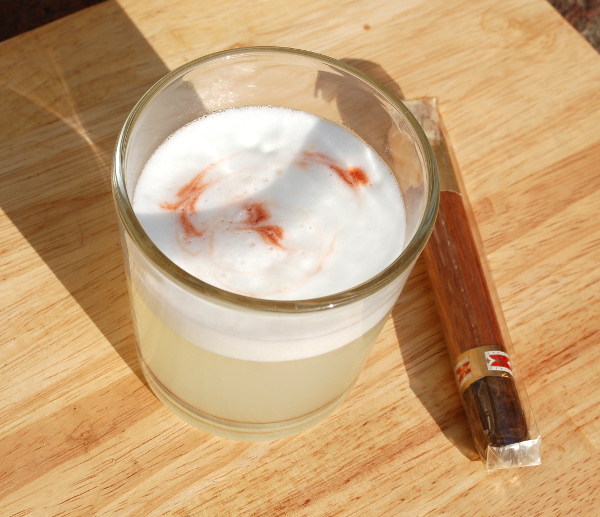 If you’re looking for a cocktail for Father’s Day this year, but are tired of whiskey-based cocktails (this does happen occasionally), DIY Cocktails and I suggest the Pisco Sour.
Pisco is a grape brandy produced in Chile and Peru. The Pisco Sour has been around in some form since at least the 19th century. It’s the Peruvian national cocktail.
To make a Pisco Sour, combine pisco with lemon juice and simple syrup, shake with raw egg whites*, and add a splash of club soda and a dash of bitters.
The end result is a drink halfway between a margarita and an old fashioned: perfect for a summer’s day, but still manly as all get-out.
Pisco Sour
Ingredients:

Separate the egg yolks from the egg whites.
In a cocktail shaker, combine pisco, lemon juice, simple syrup, and egg whites. Add ice.
Shake for a long time, at least a solid minute. You want to agitate the eggs enough to form a foam.
Pour the cocktail into a glass. Add the club syrup and top with bitters. Enjoy!
Happy Father’s Day.
* Ah yes, the raw egg whites. As we’ve talked about before, when shaken properly, egg whites magically turn into foam that’s perfect for cocktails. If you’re concerned about this, you can buy pasteurized egg whites at the grocery store. Or just don’t make this cocktail. (This Blood Orange Old Fashioned is also quite tasty.)