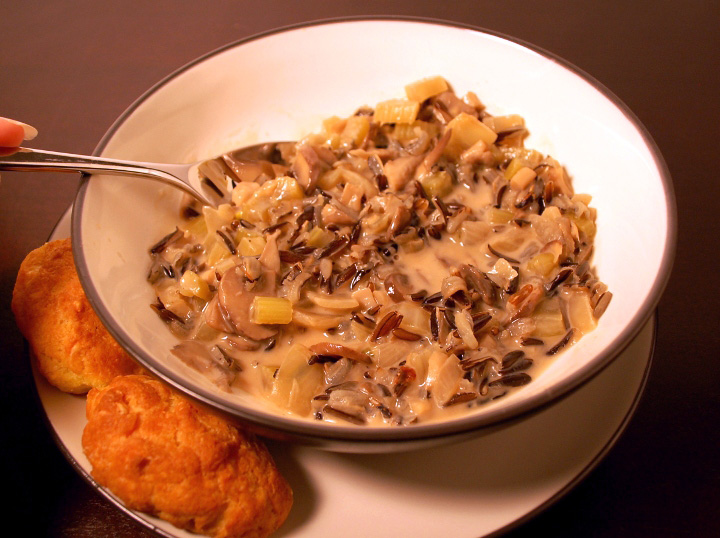 The other day, a friend was telling me about a dish that sounded strange to my Californian ears–a soup made of mushrooms, wild rice, and lavender. She insisted it was good, so I said we should try it.
Turns out the dish was a common one from Minnesota called Wild Rice and Mushroom Soup. As you can tell by the name, the soup uses wild rice (cheaper if you buy in bulk) and about one pound of mushrooms. I used half baby bell mushrooms and half oyster mushrooms.
The lavender is a California twist to the idea and is entirely optional. I happened to have some lavender on my bush outside, and it added a nice floral touch to the dish. In any case, this is a great mid-winter soup, hearty and delicious. And if you use vegetable broth instead of beef broth, it makes a great all-vegetarian entrée.
Wild Rice and Mushroom Soup
Ingredients:

Add the rice and 1 tsp of salt to a pot of boiling water. Simmer for 50 minutes until the rice splits and is tender.
Meanwhile, in a soup pot or dutch oven, heat a tablespoon or two of oil over medium-high heat. Add the garlic and cook a moment until you begin to smell the garlic. Add the onion, celery, and a sprinkling of salt. Cook until the onions become soft and translucent. Add the mushrooms and another sprinkling of salt. Turn the heat to medium and cook 15-20 minutes until the mushrooms turn brown and have released all their juices.
Next, stir the flour to the vegetables. Turn up the heat and add the white wine, scraping the bottom of the pan to get up any brown bits. Simmer until the wine has reduced by about one-third.
Add the stock and bay leaf. Bring to a boil, then simmer for 20 minutes.
Add the wild rice, cream, and lavender. Simmer 10 more minutes. Add pepper and salt to taste. Enjoy!