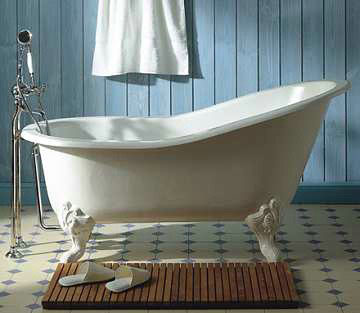 The other day at the post office, a woman in line behind me was telling another woman about her bathroom remodel. She then started talking about how she had to get rid of the original bathtub of the house, which sounded like an antique. Anyone who has ever looked knows how valuable antique bathtubs are, but this woman was apparently clueless and went on and on about how hard it was to get the bathtub to the dump.
“You took it to the dump?” the other woman said. “Oh no, you shouldn’t have done that! There are people who refurbish those bathtubs. I could have shown you where to donate it. They might have even paid you.”
“It was heavy,” the first woman said. “I wouldn’t have been able to get it to them.”
“You were able to get it to the dump!” the other woman pointed out.
Although I’m a fan of getting rid of clutter, I never throw things out. There is a fabulous world of second-hand buying out there that is great for both the environment and the pocketbook. This woman dragging what has morphed in my mind into a $22,000 clawfoot bathtub to the dump is the perfect example of the old adage, one man’s trash is another man’s treasure. Just because I don’t want it doesn’t mean someone else won’t.
When I am getting rid of something, I first think about whether I can sell it or not. Surprisingly often, the answer is yes. I have had a lot of luck selling through:
* my own yard sale/garage sale.
* Craigslist.com, especially in the case of electronics, furniture, and house supplies.
* Amazon.com, for books.
I’ve also tried selling through eBay, but didn’t like it. I tried selling clothes in consignment shops, but you make so little money and the shops are so picky, that it’s not really worth it. I used to sell CDs and DVDs for credit at record stores, but now that everything is going digital, that’s slowly going away.
For the things I can’t sell, I see if my friends or family want it. If they don’t, I give it to my local thrift store. If I have something large that I don’t want to haul, I have been known to put it on Craigslist’s free section and let someone else haul it away. There are other sources like Freecycle that have a similar service, although I haven’t used them. Lots of charities will pick things up too.
I have also looked up specific charities for specific items. There are charities that will take your old cell phone, that suit you never wear, your broken eye glasses, etc. Basically, there’s little reason to throw something out unless it’s completely broken. And even then, it can be recycled (e-waste recycling comes to mind).
Feel free to share any services that have worked for you when getting rid of your clutter.

6 thoughts on “Where To Put Clutter”