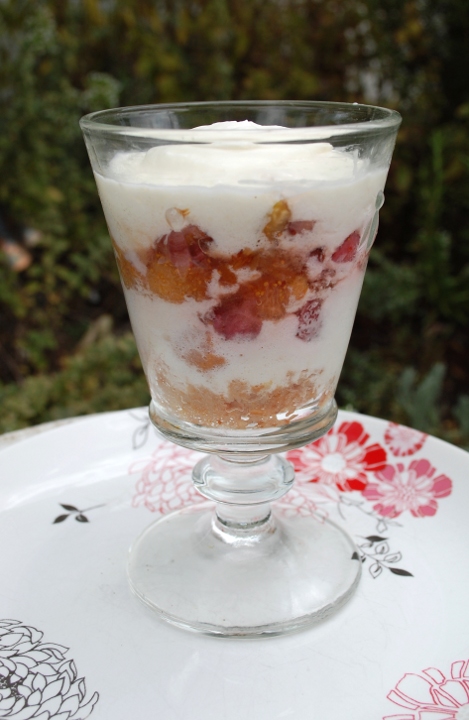 I had a loaf of stale angel food cake, so I decide to make English Trifle with it. In fact, this recipe on Bay Area Bites explains that the dessert was originally invented because people wanted to use up stale cake.

Back when little bits of bread or cake were far too valuable to toss away, even if stale as a board, cooks invented ingenious ways to use up every last crumb. Dry cake has a way of soaking up endless flavor and, in the process, transforming itself into a silken gift.

Even though I have made an English trifle before, I liked how this particular recipe said to not worry about exact proportions and instead break the ingredients up as following:

1. Enough stale cake or cookies to fill 1/3 of your container.
2. Enough fresh, summer fruit to fill another 1/3. If you don’t have enough, good-quality jam is good, too.
3. Enough yogurt, whipped cream, mascarpone, creme fraiche or similar creamy ingredient to fill the final 1/3.
4. Booze or juice sweetened gently with simple syrup or sugar or jam.
… Like a lasagna, it’s all about layering and eyeballing. The most important steps are making sure the cake gets brushed with plenty of liquid and that it’s in direct contact with the creamy diary. That’s how it will melt into lusciousness. If you’re fancy, you can take extra time to arrange the fruit into colorful layers, like those sand-filled souvenirs you see at truck stops. Finish by smoothing the top with a creamy layer.

I followed these directions and it turned out great. First, I cut the cake up and discovered that I didn’t have enough to fill a trifle bowl, so I decided to use 6 small glasses and make individual servings instead.
For fruit, I pulled out a container of strawberries I had previously frozen in water, thawed it, and drained, saving the strawberry water for the syrup. I had about two cups of strawberries and I also added about 10 white figs and a peach that was past its prime. I cut all the fruit up, combined in a bowl, and set aside.
Next, I made the syrup. Using my bourbon ice cream as a guide, I took 1/2 cup of strawberry water, 1/2 cup bourbon, and 3/4 cup sugar and heated it to a boil on the stove. Then I soaked the stale cake in the syrup.
For the creamy section of the trifle, I considered using whip cream but decide that would be too rich. Instead I made a vanilla pudding from The Joy of Cooking using milk, homemade vanilla, sugar, and cornstarch. (Pudding is so easy to make from scratch, I wonder sometimes why people buy the instant kind.)
Then I assembled the trifles. In each little glass, I put a layer of cake, a layer of pudding, and a layer of fruit, then repeated once more. On top, I put a dab of whip cream. I covered each trifle with plastic wrap and stuck it in the fridge overnight.
This may sound complicated, but it was actually very easy and only took about 20 minutes to make. And the results were awesome. I really had to stop myself from eating more than one trifle at a sitting, they were that good. They were my “breakfast” all week long.
What is your favorite way to use up stale cake?

2 thoughts on “What To Do With Stale Cake: Trifle”