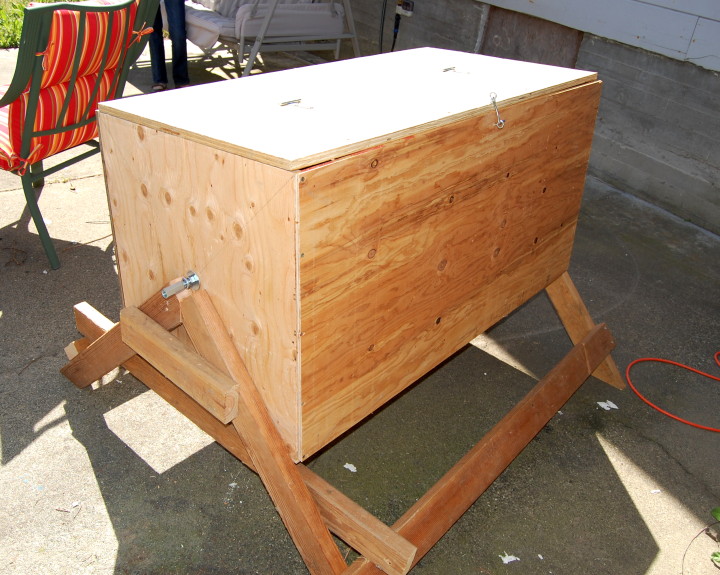 I’ve been busily filling up my compost bin. Can you believe it is half full already? Most of it is from pulling weeds out of the garden, but still there is an astounding amount of green waste coming out of my kitchen. You don’t realize how much you toss down the garbage disposal until you start collecting it for compost. Between coffee grounds, egg shells, and bits of flowers and vegetables, that thing is filling up fast. It fills weirdly good to have a place to put all that that’s not the sewage system or the garbage can.
Anyway, since the compost was coming along faster than anticipated, I sat down and looked up what I shouldn’t put in compost. It turns out that my instinct was right about this. Compost works by rotting waste and turning it into a soil-like fertilizer that can be used in the garden. So anything you don’t want in the garden, like chemicals, diseases, rocks, etc., should be left out of the compost. Here is what I am avoiding:

* Meats or dairy–they attract pests and smell bad
* Grease or fat–ditto
* Human or cat/dog waste–possible diseases
* Cat litter–ditto
* Large branches/blocks of wood–they won’t break down
* Plants sprayed with pesticides–no chemicals in the compost
* Invasive plants–you don’t want them popping up in your garden
* Diseased plants–you don’t want the diseases in your garden
* Sand/rocks/ashes–they dilute the compost
* Things that don’t break down like plastic or metal–duh.

Two problem areas–
Paper. Lots of people put newspaper and cardboard in their compost. Apparently this is okay if they are printed with biodegradable inks (soy inks, not petroleum-based inks). You don’t want to put glossy paper (like in magazines) or wax paper in the compost. Personally, I’ll just recycle paper and leave it out of the compost.
Seeds. It is true that if you compost vegetables with seeds on them, they might sprout in the compost. This doesn’t seem like a big deal to me–If I see a sprout in the compost, I’ll just pull it up. I would rather do that than examine every bit of vegetable waste for a stray seed.
The New York Compost site has a good list of what you should compost and whether it breaks down into carbon and nitrogen.

2 thoughts on “What NOT To Put In Compost”