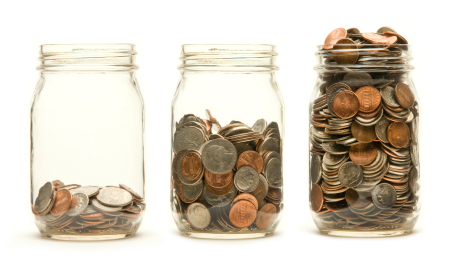 On Friday, I was making baby food by running bananas through a blender and freezing them. It was feeling tedious and I started wondering, why not just buy pureed bananas and be done with it?
Then I calculated how much money I was saving by making the bananas instead of buying them. I came up with about $28.
(I paid $3.99 for 10 pounds of bananas. Removing the skin, let’s say that ended up being 9 pounds (144 ounces) of pureed banana for my son. That’s $.03 an ounce. If I buy the same standard baby food at $1.09 for 5 ounces of banana, that’s $.22 an ounce. For the same 144 ounces of baby food, I would pay $31.68. $31.68-$3.99=$27.69.)
That set me thinking: I have dozens of frugal habits that I do throughout the day. These are small things that are part of my daily life, like eating from my garden, using rags instead of paper towels, or using homemade cleaner and homemade hand soap. What do they end up saving me in a day?
So I made an informal tally throughout the day. Here’s what I came up with:

* After making baby food, I had breakfast: two poached eggs and a piece of wheat bread. The eggs were free from my chickens, so I didn’t have to buy them. Approximate savings: $.75

* At lunch, I fed my son homemade pureed broccoli and pureed mangoes (among other food), instead of purchasing two jars of baby food. Approximate savings: $2.20.


In this list, I tried to include things I would have done regardless of whether they were frugal or not. I would have eaten food, cleaned, gone downtown, bought sunglasses, fed my son, etc. one way or another.
Of course, this is a sampling of a day. It’s not every day. I don’t buy sunglasses every day and I don’t always make pizza. Still, the point is, these frugal habits add up.

If I save $50 a day, that’s $18,250 that’s still sitting in my bank account at the end of the year.
That’s why frugality works.
You get used to it. You don’t even feel how you’re not spending money.
It’s your habit to do things that save. To get there, it’s just a matter of cultivating those habits.

4 thoughts on “What Do Frugal Habits Save You?”