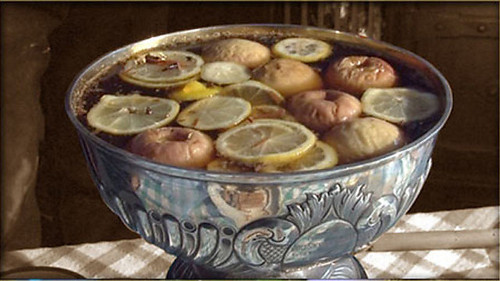 Wassail punch is an traditional alcoholic drink that people were given when they went wassailing, or caroling, to people’s house. The punch typically incorporates apple cider, according to Wikipedia: “Historically, the drink was a mulled cider made with sugar, cinnamon, ginger, and nutmeg and topped with slices of toast.”
Toast? I don’t know. However, “modern recipes begin with a base of wine, fruit juice, or mulled ale, sometimes with brandy or sherry added. Apples or oranges are often added to the mix.”
There are lots of Wassail Punch recipes floating around, but I’m intrigued with this on using beer from the BBC’s “Victorian Farm Christmas.”

But if using beer as a base for a punch sounds odd, here’s a Wassail Punch Recipe using apple cider instead. Plus bourbon!