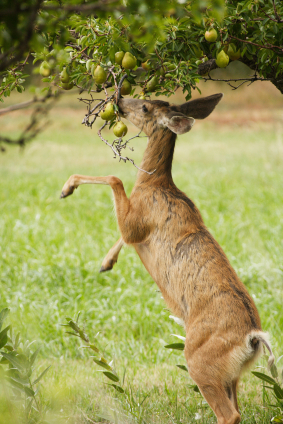 [Courtesy]
This weekend, I was talking to someone who has a deer problem. The deer, he said, had eaten all his tomatoes and he was dreading putting in an expensive fence all around his garden.
I suggested another method, which is to use plants to deter the deer. A perfect example of this comes from the comment Kristina made in my post on Three Sisters Companion Planting:

We do a different type of companion planting. We’ve successfully protected our strawberry plants from the deer by surrounding them with rosemary.

Deer dislike many kinds of plants, especially strong smelling ones like rosemary. One way to deter them is to plant what they don’t like on the outside of what they do like, thereby masking the desirable plants.
This post from DIY Life has a list of plants that deter deer, including:

Another way to use plants to deter deer comes from the book Gaia’s Garden by Toby Hemenway. Instead of putting in plants the deer don’t like, Hemenway planted what they do like, but in the form of a hedge around his garden.
On the outside of the hedge, he planted “bush cherries, Manchurian apricots, currants, and other wildlife plants for wildlife food” and “wild plums, Osage orange, and gooseberries to hold back the deer.” On the inside of the hedge, he planted domestic fruit and the rest of his garden. From the book:

This food-bearing hedge (sometimes called a fedge) fed both the deer and me. … As the hedge matured, deer became less of a problem for us. By the time the animals had munched around the hedge to its end, they were almost to the edge of the yard and showed little interest in turning back toward the house.

In this scenario, the hedge acts as a fence around the property and keeps the deer out. When they have plenty to eat, they don’t have an incentive to come inside your garden in search of other food. Thus, with some clever plant placement, you can solve your deer problem relatively cheaply and humanely.
Or so goes the theory, anyway.
How do you deter deer?