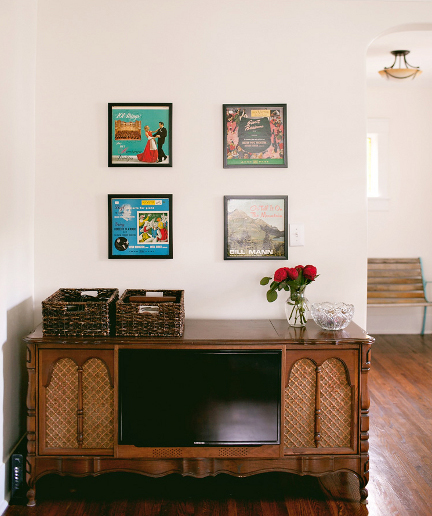 In keeping with the theme of what to do with a vintage TV console, check out this idea from Rebekka and Manley Seale’s house tour on Design Sponge. They converted a TV console into a modern one by installing a flat-screen TV into it. From the site:

It’s probably sort of sad to say that the most precious piece you own is your television set, but it’s true for us! This TV console belonged to my grandparents in south Alabama. It has a record player and radio, both of which still work. My mother grew up with it, and so did I. Many long summer afternoons were spent around this console listening to records, dressing up in costume, dancing, and watching movies. When my grandparents passed away, I was lucky enough to inherit it, and we decided to restore it by taking out the old tube TV and replacing it with a flat-screen. It works beautifully! The framed records are from my grandparents’ collection, which I was also lucky enough to inherit!

This is a great example of turning defunct technology into something that can be still used today. Great idea.