For a long time now, I have considered using a Diva Cup or The Keeper. They are “menstrual alternatives” to using pads during your period. Here is what the DivaCup looks like: 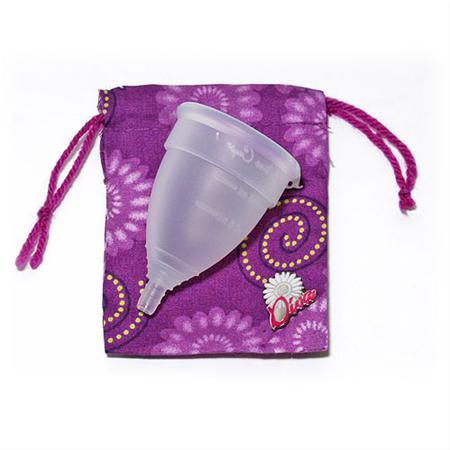 A friend of mine recently bought a DivaCup and seems to be enjoying it. I will let the DivaCup people explain how it works:

The DivaCup a non-absorbent menstrual cup that simply collects menstrual flow. It is inserted in the vagina and sits at the lower base of the vaginal canal. It is worn internally, yet because it is soft and smooth, it cannot be felt nor will it leak when inserted properly.
The DivaCup is the most clean and convenient method of feminine hygiene protection. No need to touch the flow. It is worn low in the vagina, not near the cervix, so it is easy to remove. No mess!

A couple of thoughts on these:
They seem efficient. In general, it is satisfying to me to find one gadget that can do the job of many other gadgets. That’s the idea here–you are replacing something disposable with something reusable, and as a consequence you spend less money overall and get to mess with less stuff. In this case, I wouldn’t have to store all those pads and tampons under the bathroom sink anymore. That would be cool.
They are much more earth friendly. The biggest advantage to a menstrual alternative is that it’s more environmentally responsible. Pads are a problem in landfills. The average American women will use between 10,000 and 15,000 disposable pads, tampons, and applicators in a lifetime. About “6.5 billion tampons and 13.5 billion sanitary pads, plus their packaging, ended up in landfills or sewer systems in 1998,” according to waste consultancy Franklin Associates. It takes 500 years for them to decompose. On top of that, all those pads and tampons have to be manufactured, which takes up resources and energy and blah blah blah. By contrast, with the DivaCup/Keeper you have one thing that can be used over and over again for years. Clearly, that is less wasteful overall.
But do they really save that much money? I am not saying this isn’t frugal, but it doesn’t seem like these alternatives would save as much money as is claimed. The DivaCup website says women spend $200 a year on pads. How does that happen, exactly? A bag of pads cost $5. I use half a bag in a month, so that is $2.50 a month. That means I spend $30 a year on pads. According to their calculations, the average woman spends $17 a month on pads, which means they are either going through almost four bags of pads in a month, or they are buying some pretty fancy pads.
The DivaCup and The Keeper both cost around $35. The Keeper is guaranteed for 10 years, or $.30 a month. That means I’m saving about $2.20 a month using it instead of pads. That’s not nothing, but it isn’t saving over $16 a month either. However, these menstrual alternatives would pay for themselves over time.
The people I know who use these alternatives seem happy with them. They swear they don’t leak and are more comfortable than pads. There is also the issue of the supposed toxicity of pads/tapons, caused by chlorine and other chemicals used in their manufacturing. I don’t know if rubber or silicone is necessarily less toxic, but it could be.
I guess what I’m saying is, I would like to try a menstrual alternative. But I’m not sure I want to shell out $35 for one yet.
Have you tried one?