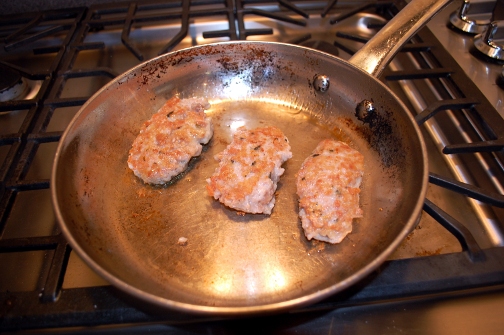 In November, turkeys were $.58/pound at my local store. That’s cheap for meat these days, so we bought three turkeys: one for Thanksgiving, one for later for the year, and one for sausage.
Last week, I got around to making the sausage. I have made sausage before, but never with poultry I butchered myself.
I ended up with 5 pounds of turkey sausage for $.61/pound. Turkey sausage usually costs between $3.99-$5.99/pound. By making sausage instead of buying it, I’m saving 85%-90%.
The sausage can be used anywhere you would use pork sausage, but with the added benefit of being healthier. We’ve already made a pizza with it and tonight I’m using it with home-grown fennel in a doctored version of this Ziti with Sausage, Onions, and Fennel recipe. Here’s how I did it:
First, I butchered the turkey. Since I was only using the dark meat for the sausage, I took the breast off and baked it for dinner using a version of this Herb-Roasted Turkey Breast recipe. In addition to a meal of sliced turkey with vegetable sides, I also made turkey and dumplings, several turkey paninis, and turkey salads just from the breast alone.
Next I removed all the dark meat from the bone. This took some time. In the end, I had 3 1/2 pounds turkey meat for sausage.
I also put the bones a pot and made Turkey Broth, which I froze for later use.
Because turkey is so lean, I had to add additional pork fat to make the sausage stick together. (Most turkey sausage is not all poultry—always read ingredients.) I asked the butcher at my grocery story for pork fat. They had some in the back, which I bought for $.20. Between that and the turkey fat I pulled off when butchering the turkey, I had a pound of fat for the sausage.
Now all I had to do was run the turkey through a meat grinder. If I wanted to get really fancy, I could also put the sausage in casings, but that’s a different post. Here’s the recipe:
Basil Turkey Sausage

Run the raw turkey and fat through the meat grinder. 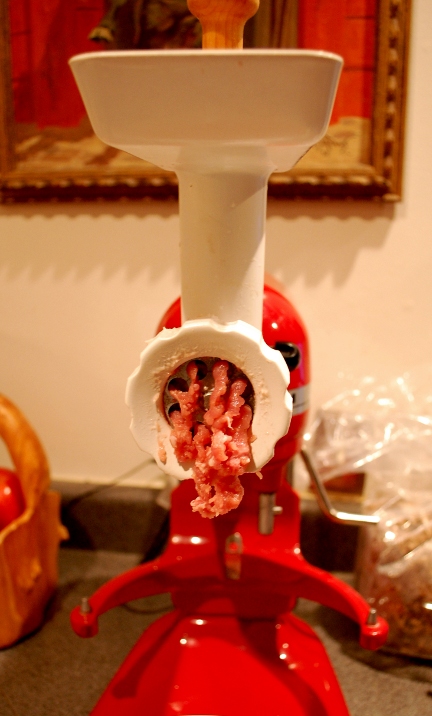 Mix the seasoning, chopped basil, and wine with the meat.
Get out a frying pan and fry up a bit of the meat. Taste the cooked sausage. Adjust seasoning and repeat as necessary.
When you are happy with how it tastes, run the turkey sausage through the meat grinder one more time.
Divide into half-pound packages, wrap in freezer-safe packages, and freeze accordingly for future use.
So in the end, one turkey yielded turkey broth, multiple turkey dinners, and 5 pounds of sausage. Pretty good!