Extreme Tech posted an interesting article by Lloyd Case on the effect going solar had on his energy bills in the last 6 months. Even though Case lives in California, he still gets less sunshine during the winter, so his solar panels collect less energy in the winter and his energy bills go up. He posted a graph to illustrate: 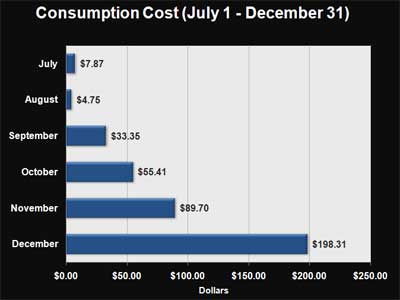 Even though $198 may seem like a pretty high energy bill, Case says that before going solar, he was paying over twice that. “My power bill for January, 2008—one year ago—was $446, after consuming 1,635kWh. 576kWh of that January total was over 300% of what PG&E calls baseline usage, and is the most expensive cost per kWh. My total power consumption cost for the last six months is $389.39—less than my utility bill for January, 2008.”
So going solar is saving him money, but it’s not eliminating his power bills in the winter. If you also consider that installing the solar panels cost him $40,000, I’m not sure how frugal these things really are. In my case, I spend around $1,200 a year on power. If I put in a similar system, even if it did generate enough power to pay my bills, it would take 33 years for the solar panels to pay for themselves. On the other hand, solar panels would also increase the value of your house. I’m certain that if I put them in, they would be a plus for buyers in this area and pay for themselves that way. Still, I hear that cheaper, more efficient solar panels are coming on the market in a year or two. Maybe I’ll wait until then.