Justin reminded me of the existence of Scotch eggs today. I have never had one, but they look good. They are “de-shelled hard-boiled egg, wrapped in a sausage meat mixture, coated in breadcrumbs, and deep-fried,” according to Wikipedia.
Apparently, some people hate Scotch eggs with a passion, like this guy on Bravo, who says, “It is a nightmarish food item, the stuff of cheap family weddings, where the irascible scary uncle gets drunk and tries to score with the bridesmaids. … Think dry, cold, coagulated, cheap quality sausage meat – minced pig eyelids, ground down ears and knee caps; the cheapest of the cheap – with a crust of bright orange breadcrumbs on the outside, and inside an egg boiled to such a degree that if lobbed in a crowded public space it would be regarded as a dangerous weapon. Put said item in deep fat fryer and leave to DIE.”
Wow. Well, I’ll admit, most of the pictures of Scotch eggs on the Internet look dried out, which is why I would use a soft-boiled egg if I were going to make one. Still, I don’t see how it could be that bad. Does this look bad? 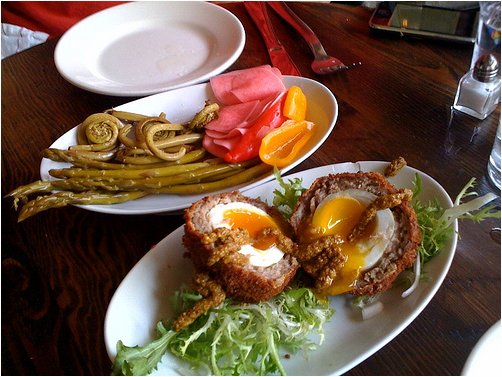 (Image by Claudine)
Not to me. Here’s a recipe for Scotch eggs.
The whole thing reminds me of another fried hard-boiled egg I’ve been wanting to try: Son-in-Law Eggs. 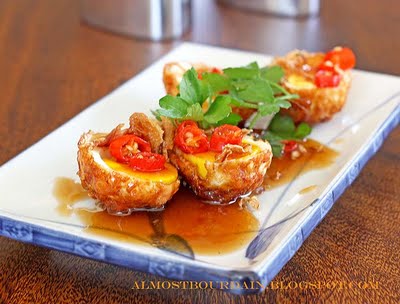 This is a traditional Thai dish where eggs are fried in a mixture of sugar, fish sauce, onions, and Tamarind. I have always meant to try these. Apparently they got their name when a mother-in-law showed up to her daughter’s house to find her out, so the son-in-law tried to cook for her and came up with these. Almost Bourdain has the full story plus a recipe.