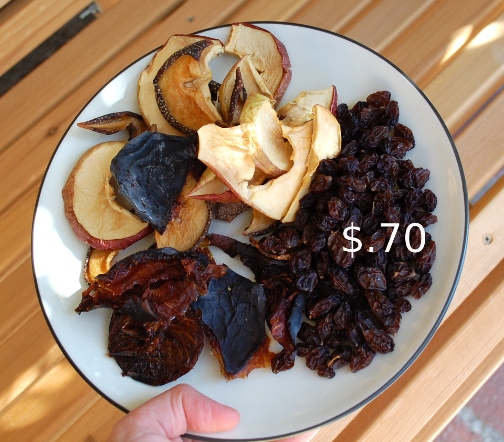 How much would a plate of dried pears, apples, plums, and grapes cost if you bought them in the store? $5.99? By dehydrating fruit myself, this plate cost me $.70.
I use my food dehydrator all the time. It has paid for itself several times over in the money it saves me.
My favorite thing to do with my food dehydrator is use it to preserve fruit, especially fruit that might get thrown out otherwise.
* Got an apple with a bruise? Cut it up, put it in the dehydrator, and make apple chips.
* What to do with a banana that’s past its prime? Banana chips.
* Did your tomato plant produce more tomatoes than you can possibly use? Dried tomatoes can be stuffed in a jar and sit at the back of the pantry for ages.
* Did you see a deal on pears–say $1 for 5 pounds, like I saw recently at the grocery store–but you’re not sure you can eat them all before they go bad? No problem, make pear chips and you can take your time.
While dried fruit is a healthy snack, you can cook with it, too.
Example: one time I bought some champagne grapes, but didn’t get around to eating them before they started looking unappetizing. So I put them in the food dehydrator to make raisins. But some grapes dehydrate better than others. After a long time dehydrating, it became clear that champagne grape raisins were going to be too sticky to comfortably snack upon. So I used them as raisins when making oatmeal raisin cookies. They were the best oatmeal raisin cookies I’ve ever had.
I use a food dehydrator with four stacking trays that looks a lot like this: 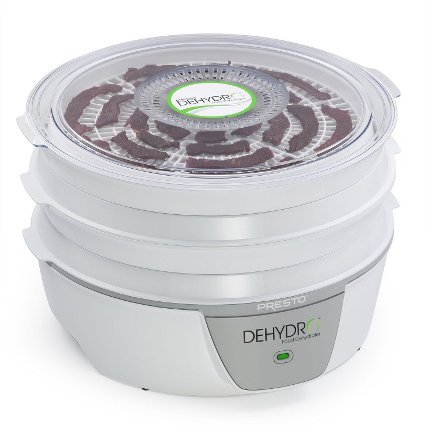 Most models are around $30, but you can get them cheaper. I’ve seen them online for $20. One time I found a food dehydrator at a thrift store for $2. I bought it and gave to my mother.
You can also dehydrate food in the oven, which is nice on a cold day. Here’s a post on oven dried tomatoes for more on that.
Dried fruit is expensive. I’ve seen dried fruit ranging between $5.99-$20 a pound. Apple chips, one of the easier things to dehydrate, can go for $8.99 a pound…or more. Yesterday I saw dehydrated apple chips with sugar on them selling for $16.99 a pound.
Apples, on the other hand, can be cheap. At the farm near my parent’s house, I regularly get apples for $.30/pound in season. Even considering the moisture that comes out in the dehydrator, that’s still big savings. 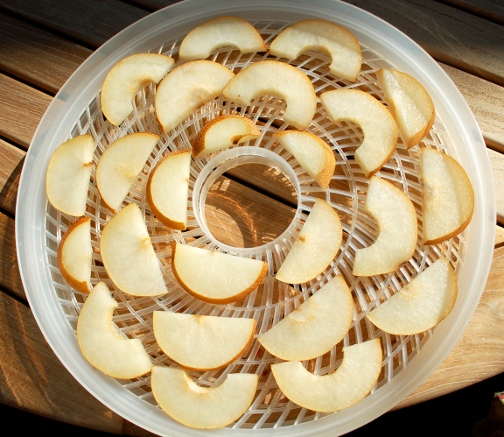 Asian pears cut up on a my dehydrator tray, ready to go.
I’m just starting to scratch the surface of things you can do with the dehydrator. I’ve tried drying mushrooms, making beef jerky like this recipe, and vegetable chips. So far, I like making dried fruit the best, but I’m still learning.
What’s your favorite food to dehydrate?

3 thoughts on “Save Money By Dehydrating Fruit”