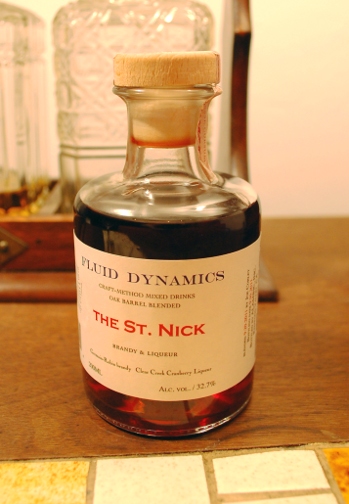 It was the bottle that drew me to The St Nick by Fluid Dynamics. It looked like the “Drink Me” bottle from Alice in Wonderland.
At first I thought it was a liqueur, but no, it was an “oak barrel blended” cocktail, a mix of Germain-Robin brandy and Clear Creek Cranberry Liqueur. So this was one of those aged cocktails I had been hearing about? The display said it was “Maybe the best drink you ever had,” which was quite something to say to me. It was pricey at $18, but I was too curious not to buy it.
I couldn’t find much information on The St. Nick, but I did find that Fluid Dynamics make other “aged” cocktails as well, including Manhattans and Sazeracs. The bottle informed me that The St. Nick cocktail was blended by someone named Joel Corley and bottled 10 days later. During that time, I assume it was aging in a barrel, but maybe not. The bottle just says it was “oak blended,” which could mean many things. Anyway, I was assured it was a “craft-method mixed drink.” I’m sure Joel Corley knows what he’s doing.
I opened the bottle when we were decorating the Christmas tree, which seemed festive. My initial reaction was “strong.” As in: strong alcohol fumes, not-that-great-of-a-brandy strong. But there was something to it that told me a. this drink needed to “open up,” the way certain red wines need to be exposed to oxygen, and b. it needed to be cold. So I shook it over ice, strained it, and took another sip. Much better. 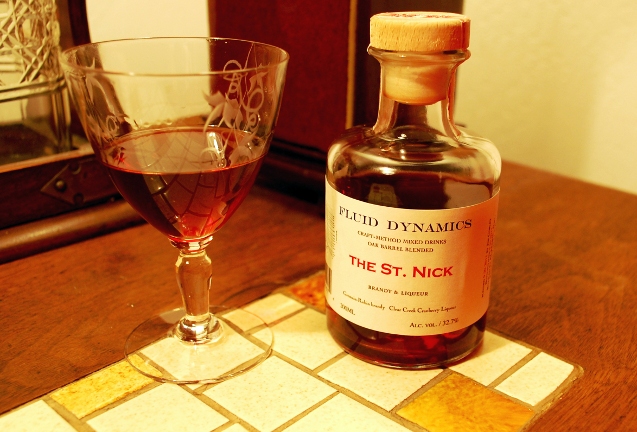 The St. Nick has a heavy brandy front and a soft, juicy cranberry finish. As the cocktail is exposed to the air, it softens and the cranberry finish takes over, making it quite pleasant. More pleasant than mixing your own cranberry liqueur with brandy? No, not really. Also, I’m not sure what “oak barrel blended” added to the mix, since I couldn’t taste oak in the cocktail. But still, a nice drink. Maybe it needed a squeeze of lemon, but nice.
Considering you get two large pours from this bottle, you’re paying about $9 per serving for The St. Nick. But! You get the cool bottle! Is that worth $18? Not really. I’m not likely to try another Fluid Dynamics again if I happen upon it, but it was worth satisfying my curiosity to try it once.