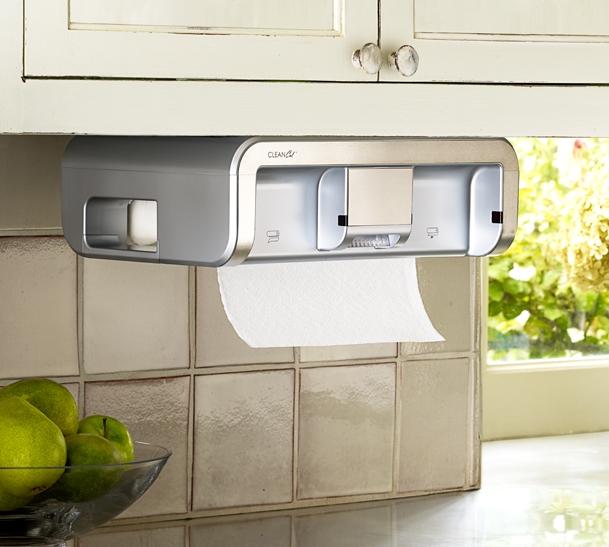 Awhile back, I wrote a post about 5 Ways To Save Money On Paper Towels. I mentioned that I wished there was a machine that could cut paper towels any length you wanted. I meant a manual machine along the lines of a paper cutter, but instead I was informed there is a high-tech option available called the CleanCut Paper Towel Dispenser.
Here’s the product description:

I had an opportunity to try the CleanCut Paper Towel Dispenser out. Generally, I love machines that make life easier. I use a dishwasher to clean my dishes, a Roomba vacuum cleaner to sweep my floor, a thermostat to control my heat, so it seemed like I might like the CleanCut Paper Towel Dispenser to cut my paper towels for me. Although the high price of the gadget–$140-$160–made me pause, it still seemed possible that with repeated use you could make that money back on saved paper towels. Also, it might be a fun or attractive gadget to have in the kitchen.
But when I received the CleanCut Paper Towel Dispenser, I was perplexed. First of all, it is huge. At 16 x 6-1/2 x 11-1/2 inches and weighing almost 7 pounds, it is the size of a fax machine.
Secondly, the site claims it is stainless steel. It is not. It is made of gray plastic. It does not look high-end to me, and in fact felt kind of cheap.
Third, you can’t just flip the CleanCut on and begin using it, you have to install it first. It has to be mounted underneath a kitchen cupboard and near a power outlet, which means that this product won’t work for many kitchens simply on logistics alone.
Anyway, I got the CleanCut Paper Towel Dispenser installed and then went about loading paper towels into it. First problem: the jumbo rolls of paper towels I buy from the outlet center wouldn’t fit. This was confusing, since the website says, “It doesn’t matter what paper towel you buy, the CleanCut is designed to work with any brand.” Brand, yes, but size of roll, no.
Luckily, I had a smaller paper towel roll around, so I loaded that instead. Finally I could try it! And I found that the no-touch technology works pretty well. It takes a little getting used to, but in general, it was fun to wave you hand over the gadget and have paper towels magically roll out to your exact specifications. This is not without its charms. 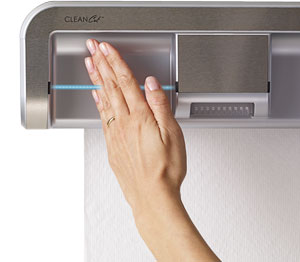 Also, if you are someone who worry about germs, one advantage of this product is that you don’t have to touch it to get the paper towel. So, if you’re cutting raw chicken, say, you can get a paper towel without having to touch anything, thus reducing cross contamination or at least cutting down the amount of time you have to cleaning things you’ve touched.
So, let’s get to the main question: Will the CleanCut Paper Towel Dispenser save you money?
I seriously doubt it.
The version of the CleanCut I tried costs $160. Just to break even, you would have to cut down your paper towel usage enough to save $160. Well. That is a lot of paper towels.
In my case, I buy 4 jumbo packs of paper towels at about $60 a year. Let’s pretend I waste half of every paper towel and by scrimping every piece of paper towel through the CleanCut, I cut that down to 2 jumbo packs. That means I would save $30 a year on paper towels. At that rate, it would take me over 5 years to make back the $160 I spent on the CleanCut Paper Towel Dispenser.
At that point, you might start making money on this product–except there’s still the issue of the electricity you are using to make the CleanCut run. Every time you wave your hand over the front, the machine is pulling electricity out of the wall outlet to give you the paper towel, which of course goes on your electricity bill. Is the money you are arguably saving by using a little bit less paper MORE than the money you are spending on electricity to make the CleanCut work? That’s a question that can make a penny pincher’s head hurt, but it’s probably negligible either way.
Therefore, CleanCut is not a good way to save money on paper towels. Switching to rags does a much better job–and they are free.
SO let’s sum up the CleanCut Paper Towel Dispenser:

Fun to use.
Will reduce the amount of paper towels you use.
Reduces cross contamination.
Great for people who fear germs.

Expensive.
Big.
Plastic, not stainless steel.
Hard to install.
Will only work in some kitchens.
Doesn’t use jumbo rolls.
Uses electricity.
Won’t save you money.

Of course, that’s just my opinion. If you used this product, what did you think?