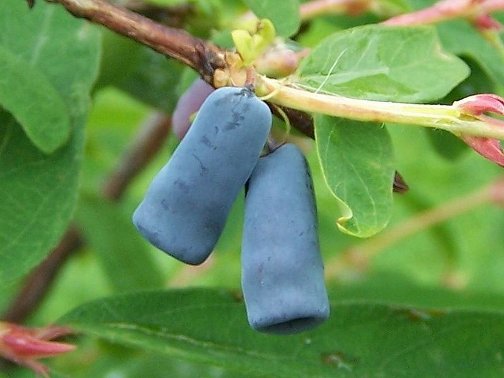 [Wikipedia]
I’m curious about the honeyberry plant, otherwise known as edible honeysuckle. I have never had the fruit, but once I do, there’s a good chance the plant will end up in my garden.
Originally from Siberia, Honeyberries produce a blueberry-like fruit. The berry is seedless, ripens early–even before strawberries come in–and apparently tastes like wild blueberries with a little bit of currant mixed in.
In addition to eating honeyberries fresh, people use them for pastries, jams, juice, wine, ice cream, yogurt, sauces, and candies. When frozen, the skin of the berry melts away, which makes them a good candidate for ice cream. They turn the ice cream bright purple-red because the juice has “10 to 15x more concentrated color than cranberry juice,” says Wikipedia. 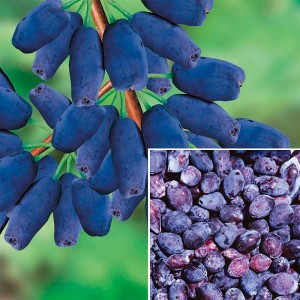 [The Potting Shed]
Honeyberries are hardy plants, especially if you live in a cold climate. Because it originally comes from Siberia, the honeyberry can withstand winter temperatures of -47 degrees Celsius. It’s blossoms can stand cold up to -7 degrees Celsius.
Unlike blueberries, honeyberries aren’t fussy about soil PH. They can be put in a variety of soils and can thrive in either sun or partial shade. Since they get 6-8 feet tall, they sound like they would be a great way to screen out the neighbors.
You can purchase a honeyberry plant for $19.95 here.
Have you grown honeyberries? Tell me about it.