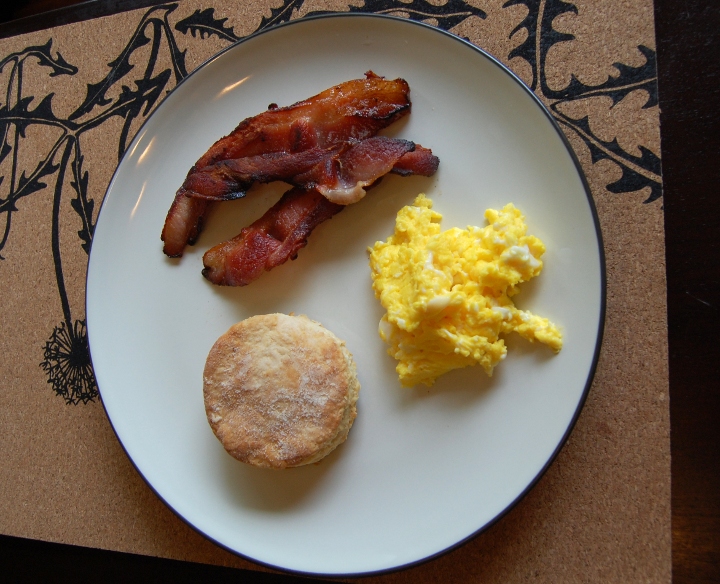 The above picture is our Sunday breakfast: homemade bacon, fresh-baked buttermilk biscuits, and scrambled eggs from our own chickens.
Having chickens is great, so far. It’s not exaggeration to say that they are the best eggs I’ve ever eaten. I don’t even have to add salt when I cook them. I like to fry them over-medium and eat them with toast, or poach them for a bistro salad. I’ll be making ice cream with them in the near future.
Having my own eggs has coincided with the 550 million egg recall. As you probably know, these eggs were taken off the market because they might have been contaminated with salmonella. Even scarier are the filthy conditions of the chicken farms that produced these eggs, which according to the above article include:

•Barns with dozens of holes chewed by rodents that mice, insects and wild birds used to enter and live inside the barns;
•Flies on and around the egg belts and hen feeders;
•Manure built up in 4- to 8-foot-tall piles in pits below the hen houses, in such quantities that it pushed pit doors open, allowing rodents and other wild animals access to hen houses;
•Dozens of hens, which had escaped their cages, roaming freely, tracking manure from the pit to other caged parts of the barns;
•Hen houses with significant structural damage and improper air ventilation systems.

This is on top of the questionable practices of many egg operations, which some people consider animal abuse: chickens are shoved together in cages so small, they can’t stand up or move their wings. On top of that, they’re often shot with antibiotics, hormones, and other drugs.
Contrast that to my hens. They have giant cages, they get to roam around the yard, and they get tons of treats and attention.
The point is, I haven’t had to worry about the egg recall at all. And I’m starting to see another benefit to growing your own food, besides increased quality and saving money. It reminds me of the e. coli outbreak in Spinach that happened in 2006. Everyone was upset because they couldn’t eat spinach, but I grew my own, so I didn’t have to go without spinach and I didn’t have to worry about e. coli, either. Earlier this year, there was a basil shortage, but I grow my own, so I had more than I knew what to do with. The price of beer is going up like crazy, but my husband makes excellent beer that costs under $1 a bottle.
Our food system seems unstable sometimes, which is why it’s great to have your own source of food. It’s nice to have the peace of mind when you sit down to breakfast that you know exactly where your food came from, and what went into it.

8 thoughts on “Peace of Mind at Breakfast”