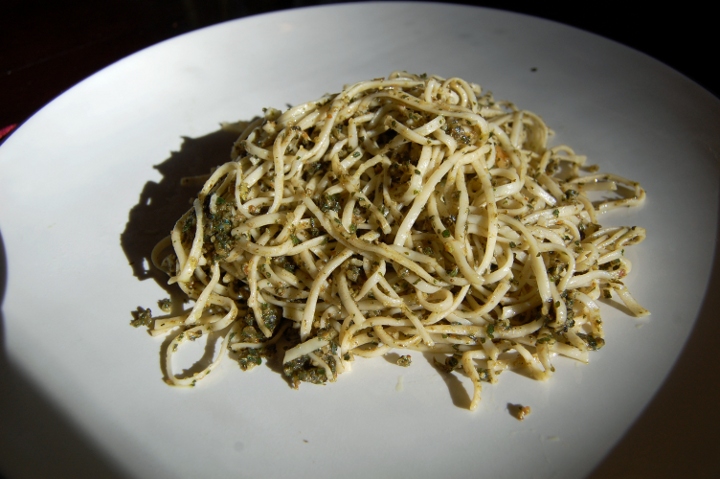 NPR reported that there is a basil shortage this year due to downy mildew. The article says this will put a cramp in the style of pesto lovers, but you don’t have to make pesto out of basil. In fact, I’ve made pesto out of lots of different herbs and one of the best I’ve discovered is oregano pesto.
I put in my oregano plant about five years ago and it has been thriving ever since. Here it is when I first put it in:

Since then it has quadrupled in size. That is a lot of oregano, far more than I would ever use. But that’s fine because the plant requires no care besides the occasional watering at the height of summer. Contrast that to basil, which is plagued by pests, needs a ton of water, and can only be grown in the summer. One plant gives me no trouble and the other is a prima donna in the garden.
Of course, basil tastes about a million times better than oregano, but that’s the point here. Oregano pesto is a poor woman’s version of basil pesto. It uses a cheaper herb, cheaper nuts (walnuts instead of pine nuts), and less oil, but you still end up with a delicious pesto that tastes almost as good as the original. Together with a little garlic bread and wine, oregano pesto makes a great vegetarian dinner.
Recipe:
Oregano Pesto
(Serves 2 people)
Ingredients:

Directions:
Put a pot of salted water on to boil. Cook the spaghetti.
In a food processor, combine oregano, garlic, basil, walnuts, and a pinch of salt. Grind until it all looks uniform. Slowly add the olive oil until it becomes a paste. Go conservative with the oil because you will also be adding the butter. It doesn’t take much. I would estimate about 2 Tbs of olive oil does the trick.
Add cheese and butter to the mix and grind it all up again in the food processor. Taste the pesto. It should have a nice balance of oil and herbs and nuts and salt. If not, adjust the ingredients accordingly. Most likely you may have to add a bit more salt.
When the spaghetti is done, get a frying pan out and spoon the pesto into it. Turn the pan on medium heat and warm up the pesto. Add the spaghetti to the pesto. Turn the heat to low and slowly began to mix the pesto into the spaghetti with a spoon or spatula. Keep this up until the pesto is fully integrated into the spaghetti and everything is warmed through.
Dish onto two plates. Top with more grated cheese, if you like. Enjoy!