(Image courtesy Wikipedia)
The other day, I went into a heirloom seed store, which happens to be down the street from my house, and took a look around. I was excited to see they carried stevia seeds. I had recently looked around on the Internet for a way to purchase this rare herb but didn’t find any sources, so I was happy to find the seeds so close to home. Unfortunately, it’s too late to plant them, so I will either try to grow the plant indoors or wait until spring.
(I have since discovered that this page sells stevia.)
Stevia is a natural sugar substitute. Apparently, it is 300 times sweeter than sugar! I can’t even imagine what that would taste like, but I am deeply intrigued. It has none of the calories of sugar, which means you can eat sweets made with it and not gain weight.
How safe is stevia? Pretty safe. It’s nontoxic and countries like Japan have been using it as a sugar substitute for years. As with most herbs, the FDA doesn’t seem to have a strong position on it, which is fine with me. Like anything, it’s probably not meant to be consumed in mass quantities, which would not be possible with one or two plants anyway. Better yet, it is a natural alternative to the artificial sweeteners we use in diet foods, which have been manipulated in a lab with who-knows-what chemicals. I would rather eat an herb than chlorinated sugar any day. 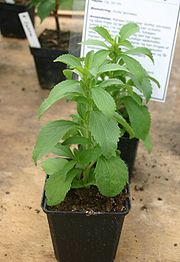 All that to say, I think I’m going to try growing the plant indoors and see how it fares. If it doesn’t make it, I can always try again in the spring. I don’t know whether I will like it how stevia tastes once its grows, but that’s the fun in gardening–seeing how a plant works from the seed on up.

1 thought on “My Next Gardening Experiment: Stevia”