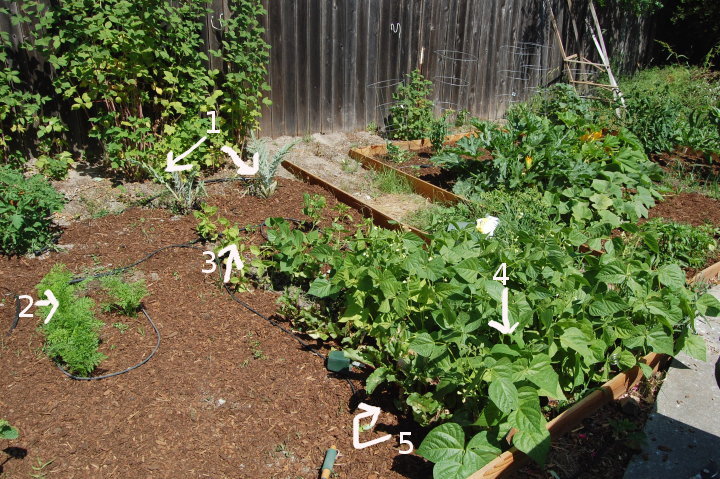 1. Artichokes. This is my other problem. There is something wrong with these plants and I don’t know what. They have … a disease? Maybe? They got huge and produced a couple of artichokes and then they started dying one leaf at a time. I finally cut them back to their current state. I may have to dig them out since this is the second year this has happened. No idea what their problem is.
2. Carrots. They seem to be doing well, although they are growing really slowly. There were some radishes in the blank space beside them, but that crop is done.
3. Soy Beans. I put in a couple of soy bean plants as another experiment. I don’t know much about them, but I want to see how the plant works. I only have four soy bean plants, so I may not get much of a crop, that that’s okay.
4. Beets. You can’t really tell in this picture, but there is a row of beets there. They have some puckering on the leaves but seem to be developing okay. Next year I’m going to plant them in partial shade.
5. Kentucky Green Beans. These are my husband’s favorite vegetables, so I planted a ton of them. They seem to be doing great.
Picture 4: 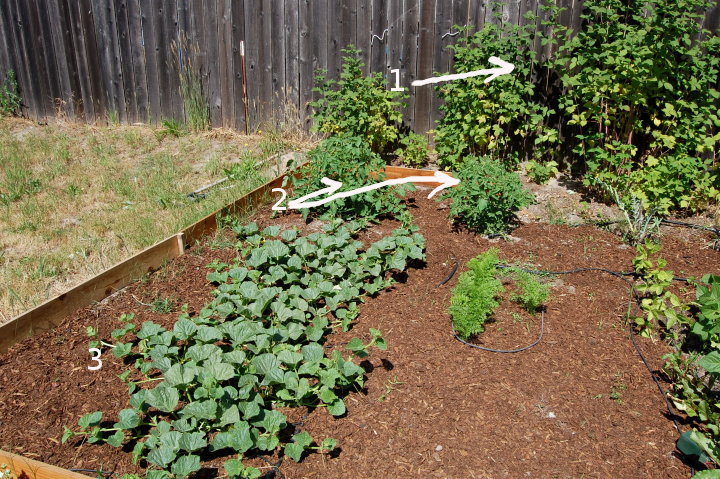 1. Raspberries. The back of my garden is bordered with raspberry plants. The front is bordered with strawberries. (I forgot to include the strawberries in the picture.)
2. Two More Tomatoes. They are Juliet and Pineapple tomatoes. I split the tomato plants up this year because you aren’t supposed to plant tomatoes in the same place twice. It creates diseases in the soil. Last year I had them all where the brandy wine is sitting, but this year I put two plants in one plot, and one plant in the other.
3. Crane Melons. I fully expect these plants to fill in the entire area where the carrots are currently. Last year, they took up half a plot. And they were completely worth it since they made dozens of juicy, delicious melons for late August. (Crane melons are similar to cantaloupe, but juicier.)
There it is, an honest assessment of my garden this year. I’m already learning a lot, as usual, and as usual there’s still one unsolved mystery–what the heck is wrong with my artichokes?