Not everything I do in the kitchen is perfect. I am philosophical about this–I figure it’s part of becoming a better cook. Learning from your mistakes and all that. I’m not sure if the following could really be called a mistake, but I sure wasn’t happy with it.
Last week, I made mozzarella for the first time. I used a very common recipe that is all. over. the Internet in different forms. It’s really easy. You heat the milk, add citric acid and liquid rennet, and let it sit until curds form. Then you drain all the whey out of the cheese and knead it like bread, occasionally zapping it in the microwave to force excess liquid out of it. (You can check out the recipe under the link for details.) It is very fast. Within a half hour, you have something that looks remarkably like mozzarella cheese: 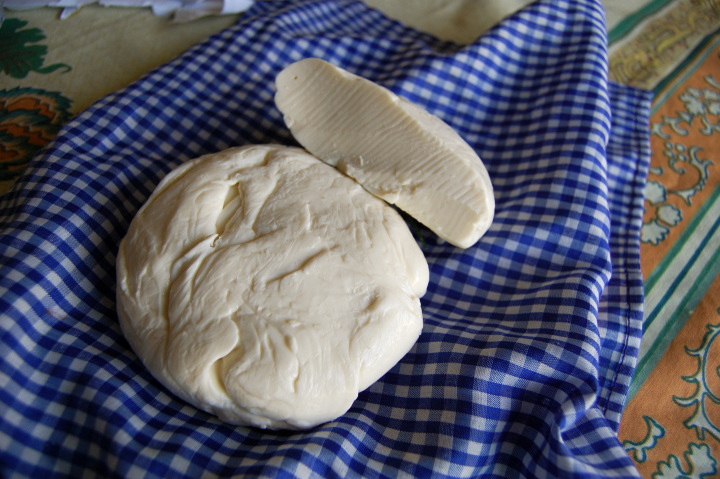 It tasted good too. It had a distinctly mozzarella-like flavor. The texture was a little off, however. It was more compact than it should be, more like a giant cheese curd than stringy mozzarella.
But that was a small detail. I had made the cheese and was happy with it. I had spent about $3 on approximately 1 lb. of cheese, so it seemed like a good money saver. I was all set to call myself a cheese maker, and then I decided to try to melt my new mozzarella.
I knew there was a problem when I started to grate the cheese. Instead of looking like grated cheese, my mozzarella looked more like a grated eraser. Doubtfully, I sprinkled it on a homemade pizza and put it in the oven.
Have you ever tried to melt nonfat cheese? It doesn’t really melt. It sits on whatever you put it on and sort of browns and hardens instead of spreading like it’s supposed to. That is exactly what my mozzarella did, only it wasn’t nonfat. I tasted the pizza and it was gross. While I usually force myself to eat my failures, this was unpalatable. We had to throw the pizza out.
I was upset. What was wrong with my mozzarella? I figured there were two possibilities:
1. I did something wrong in the recipe. This isn’t too likely–I was painstakingly careful about the recipe, compared it to several other recipes on the web, and did everything to the finest detail. However, I could have not kneaded enough or microwaved too much or something along those lines.
2. My milk wasn’t good enough. I used homogenized whole milk from Costco. Maybe I needed raw milk? Fresh milk? I don’t know.
Then a third option came up. I asked my local food guru, a man who makes cheese and beer and wine. When I asked him what he thought went wrong, he said, “Did you use the 30 minute mozzarella recipe?”
I said I did. He nodded and explained that that was my problem–with the 30 minute recipe, the cheese doesn’t have time to form the delicate, soft proteins it takes to make cheese melt. What I needed to do, he said, was use a recipe where it takes four hours for the cheese to form. The proteins from that are softer and can melt better.
I am not 100 percent sure that the food guru was right, but it does explain why the cheese tasted good cold but didn’t melt. In the end, I might try mozzarella again to see if I can do better. One thing is for sure, I will be using a different recipe.

2 thoughts on “My First Attempt at Mozzarella”