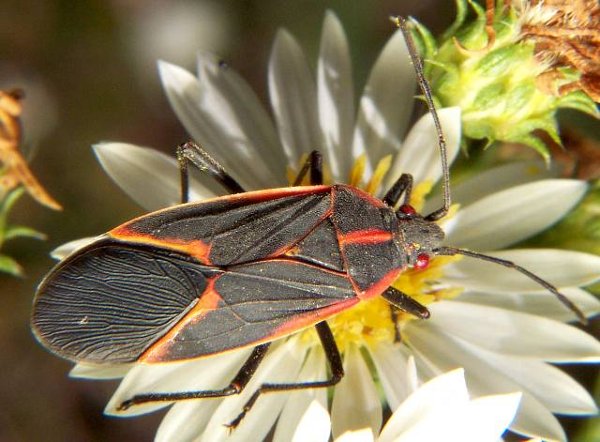 I have hundreds of boxelder bugs in my yard this year. I have no idea why, but they are going through some kind of renaissance. In moderation, they aren’t much of a problem, but by the hundreds, they’re pretty annoying.
In particular, they have pretty much destroyed my strawberry crop this year. Sometimes I would come out and there would be 15 boxelders on one strawberries! Disgusting! Since boxelders like fruit, I’m concerned for my blueberries, nectarines, and tomato crops too.
So I looked into it: boxelders don’t seem to have much in the way of predators. Birds leave them alone. Supposedly preying mantis eat them, but I don’t have those in my yard. Spiders are a “minor predator” to the boxelder. Spraying kills them, but I don’t want to spray insecticides or soap on something as porous as a strawberry. They mate on boxelder, maple, and ash trees, and in my case, that means they are coming out of my neighbor’s yard.

In short, I was not winning the war on boxelder bugs.
So what I finally did was put a plastic cup under each strawberry and filled it with about an inch of water. Then I came out a couple of times a day and knocked any boxelders I saw into the water so that they drowned. 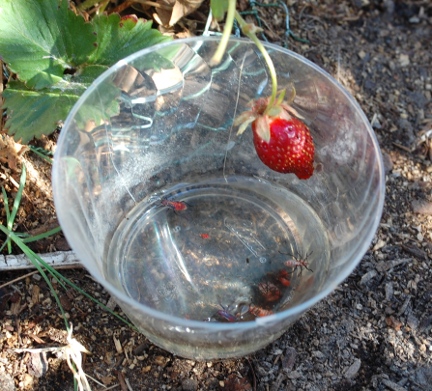 It was pretty disgusting, but it has worked. The tide is turning and I’m starting to get strawberries again. There are still plenty of boxelders in my yard, but at least I have a method for reducing the population.
Are boxelder bugs a problem for you?

4 thoughts on “My Boxelder Bug Trap”