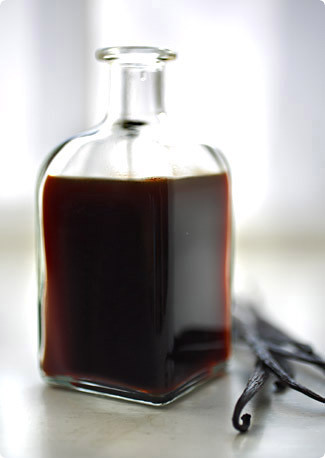 For Christmas this year, I’m making my own vanilla extract to give as gifts. I’m planning to put the extract in a pretty bottles and decorate them with ribbons. I like this post by The Traveler’s Lunchbox about how to make your own. All it takes is a combination of alcohol, vanilla beans, and time. It is so easy that she did it on accident–she thought she was making vanilla scented rum when in fact she was making vanilla extract.
Technically, it’s too late in the year to make vanilla extract and give it as a gift because it takes at least two months to get the extract going. I’m getting around this by adding a sticker to the bottle that says “Do not open until January 31” (or whatever I decide sounds right).
The Traveler’s Lunchbox also linked to some relatively cheap sources for vanilla beans at Vanilla, Saffron Imports or The Organic Vanilla Bean Company. Sounds like you can get the beans for a reasonable price, but most orders are limited to a $15-$20 minimum. Bourbon vanilla is supposed to be the best, at least according to a Good Eats episode I saw on vanilla awhile back.
That episode also explained where vanilla comes from. Did you know vanilla is the seedpod of an orchid? In fact, it is the only edible thing that comes from orchids. (Alton Brown from Good Eats–and my mother–are both negative on making vanilla extract because it takes so much time to get started, which might be why The Traveler’s Lunchbox recommends using some store-bought extract to jump start the process. Alton Brown suggests making vanilla-infused sugar instead, if you like that sort of thing.) 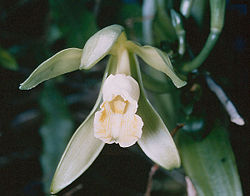 Vanilla planifolia
Despite the better prices I listed above, I bought my beans from Costco for $10. I only ended up using about four of the 10 beans I bought in the vanilla extract ($4). I also used a bottle of cheap vodka ($10) and some left-over extract to get the mixture going ($2). That sounds expensive, but this is a huge batch of vanilla I’m making here–enough to give away as gifts and keep some for myself. Also, once it’s going, all you have to do is keep adding used beans and more alcohol to have ongoing vanilla extract. I’m estimating that considering all that, I have a really fancy gift here for about $3-$4 per person.

2 thoughts on “Vanilla Extract for Christmas”