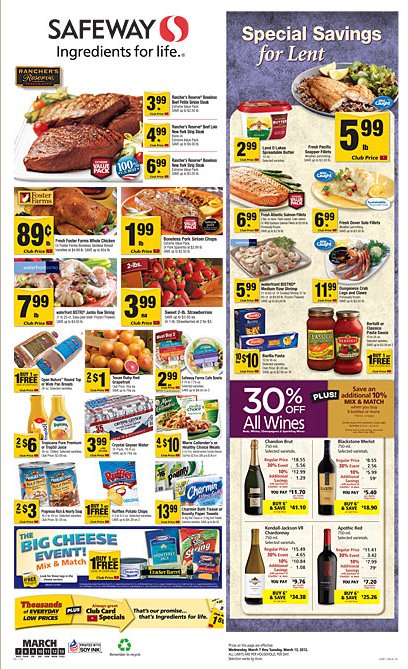 A loss leader is a product sold at a low price to get people to come into the stores. The most common place you see this is at grocery stores. The big stores will typically have one or two deals that they advertise to get people to come in, and the idea is that people will then do the rest of their shopping at the store.
Often the stores that have the best loss leaders also have the highest prices on other goods. So around here, at least, it doesn’t pay to shop at the store that gets the best loss leaders. You are better off shopping at the store with the most consistent low prices for overall savings on your grocery bill.
OR you can do what I’ve been doing lately, which is to only buy the loss leaders at the big stores and then do the rest of my shopping at the cheapest store.
I started doing this when I learned that the price of meat would be going up this year. Since I don’t like getting the weekly advertisements in my mailbox–who wants to mess with all that paper?–I started looking them up online.
It turns out that all my local stores post their weekly deals on their websites. In order to find out the best deals for the week, all I have to do is spend 10 minutes at the computer. I can look at all the deals, pick what are worth making a special trip for, and swing by during the week to pick them up.
I find this works the best for meat, but I have also gotten good prices on vegetable, fruit, and cheese this way too.
This sounds like it is a lot of extra work, but it’s not. Since there just aren’t that many deals out there these days, it usually means maybe one extra trip a week. I do my regular shopping at my favorite local grocery store and then I swing by to pick up the loss leaders when I’m out doing other errands.
If I’m not going to use the food immediately, I store it in my freezer until I’m ready for it.
The best part about this is I can tell if I am getting the best deals available. If I want to buy corned beef for St. Patrick’s Day, I can easily tell which store has the best price. If it is fish season, I can look up who has the most variety and lowest prices.
Best of all, I never miss a good price this way. I’ve gotten deals for 65%-85% off that I would have never known about otherwise, which really makes a dent in my grocery bill.
And all for 10 minutes a week on the computer.
What’s your method for finding the best weekly deals at the grocery store?

1 thought on “Look Loss Leaders Up Online To Save Money”