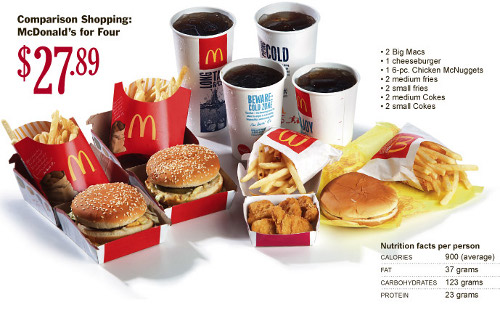 The New York Times has an interesting article on whether junk food is really cheaper. It turns out, it isn’t.
As I said in the post on 10 ways to cut your food bill, it is often cheaper to cook for yourself at home than to eat at a fast food restaurant (although that takes more time an effort). The article agrees:

I frequently read confident statements like, “when a bag of chips is cheaper than a head of broccoli …” or “it’s more affordable to feed a family of four at McDonald’s than to cook a healthy meal for them at home.”
This is just plain wrong. In fact it isn’t cheaper to eat highly processed food: a typical order for a family of four — for example, two Big Macs, a cheeseburger, six chicken McNuggets, two medium and two small fries, and two medium and two small sodas — costs, at the McDonald’s a hundred steps from where I write, about $28. (Judicious ordering of “Happy Meals” can reduce that to about $23 — and you get a few apple slices in addition to the fries!)
In general, despite extensive government subsidies, hyperprocessed food remains more expensive than food cooked at home. You can serve a roasted chicken with vegetables along with a simple salad and milk for about $14, and feed four or even six people. If that’s too much money, substitute a meal of rice and canned beans with bacon, green peppers and onions; it’s easily enough for four people and costs about $9. (Omitting the bacon, using dried beans, which are also lower in sodium, or substituting carrots for the peppers reduces the price further, of course.)

It then goes on to say the reason why people don’t cook as much anymore doesn’t have to do with a lack of time either: “The real challenge is not “I’m too busy to cook.” In 2010 the average American, regardless of weekly earnings, watched no less than an hour and a half of television per day. The time is there.”
So if people have the time to cook and it is cheaper and healthier to do so, why don’t they? One of several reasons the article suggests is that people view cooking as work. They think it is a chore, so they don’t want to do it, especially after a long day of work.
The solution, the article says, its “Real cultural changes … Somehow, no-nonsense cooking and eating — roasting a chicken, making a grilled cheese sandwich, scrambling an egg, tossing a salad — must become popular again, and valued not just by hipsters in Brooklyn or locavores in Berkeley. The smart campaign is not to get McDonald’s to serve better food but to get people to see cooking as a joy rather than a burden, or at least as part of a normal life.”
What do you think?