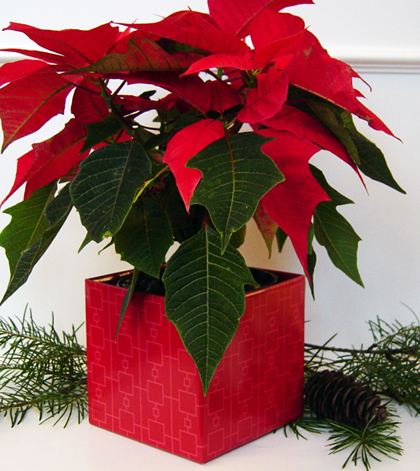 Last year, my mom took me to the Ecke Poinsettia farm, the largest production of poinsettias in the country. I had never really cared about the plant until I saw a huge greenhouse filled with the most beautiful varieties of poinsettias. They can be white or pink, their leaves can look like red roses, they can look like they are splashed with paint… I bought one with leaves that looked like a court jester hat. It kept its leaves until April.
Poinsettias are from Mexico. According to Wikipedia, the plant’s association with Christmas “began in 16th century Mexico, where legend tells of a young girl who was too poor to provide a gift for the celebration of Jesus’ birthday. The tale goes that the child was inspired by an angel to gather weeds from the roadside and place them in front of the church altar. Crimson “blossoms” sprouted from the weeds and became beautiful poinsettias. From the 17th century, Franciscan friars in Mexico included the plants in their Christmas celebrations.” A Mexican ambassador introduced the plant into the U.S. in 1928.
Poinsettias have a lot of misconceptions. One is that the red are their flowers–it’s not true. The red “flowers” are really leaves that turn red. The tiny yellow buds you see are the poinsettia’s actual flower. Another misconception is that they are deadly poison. It turns out this is an urban legend–they are not good to eat, but they won’t kill you.
A third misconception is that you have to throw them out when they lost their leaves sometime between January and April. This, I’m told, is also not true. Poinsettias can be saved and re-used the next year. It just takes a little care. Here’s my understanding of how to do it:
1. While the plant is blooming, fertilize and water regularly. Poinsettias like a lot of water, so water whenever the soil gets dry to the touch. Keep the plant in a sunny place.
2. In April or May, cut the plant down to about 3-5 inches. Keep it watered. New growth should start to appear. You will want to prune the plant to give it the desired shape, otherwise it will look mangy come Christmastime.
3. In September, the plant needs a “short day” to produce flowers. That means providing it with darkness from 5 p.m.-8 a.m. So stick the poinsettia in a closet or put a box over it at night. In the day, continue to give it light. You will have to keep this up until the leaves start to turn red, about two months. (I’m a little confused on this point–other care guides said to just leave the poinsettia in the closet for two months, but I’m a little suspicious of this. Either way, it’s clear the plant needs darkness to produce.)
A little labor-intensive, yes, but definitely a frugal way to keep a plant.

1 thought on “How To Save Your Poinsettia”