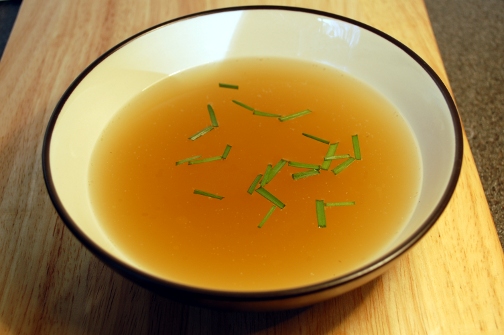 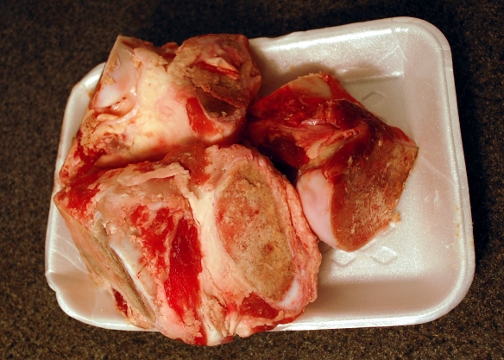 Butchers used to sell knucklebones for next to nothing, making beef broth frugal as well, but these days around here, knucklebones can go for as high as $3 a pound and are rarely under $2 a pound. Since you need 5 pounds of knuckleboness to make 10 cups of broth, this isn’t as high a savings as say, the completely free cost of making vegetable broth. But if you buy the knucklebones on sale, it’s still cheaper than paying for beef broth by the can.
And there’s another reason to make your own beef broth: quality. Homemade beef broth tastes about a zillion times better than the packaged stuff, and gives anything you put it in–soup, stews, etc.–a sense of umami that it wouldn’t otherwise have.
Since I was craving French onion soup, I decided to make the broth by hand. The only thing I purchased for the broth was the knucklebones. Many recipes tell you to use whole vegetables in your beef broth, but since that adds to the cost of the broth, I use vegetable ends that normally would be tossed in the compost. As I’m cooking, I collect these ends in a freezer bag until time to use in broth. When I am ready to cook the broth, I dump the frozen vegetables in the pan with the rest of the ingredients. Other than that, I added water, a bay leaf, and salt to the broth.
You’ll notice that my broth isn’t as dark a brown as the beef broth you’re used to seeing. This is because most beef broth in the store is colored. By itself, beef broth is only a little darker than chicken broth. There are ways to color the broth yourself, but since it adds nothing to the taste, I don’t see the point in bothering.
Here’s the recipe:

Turn the oven to 425 degrees. Put the beef knuckles in a pan and roast for 30 minutes until brown: 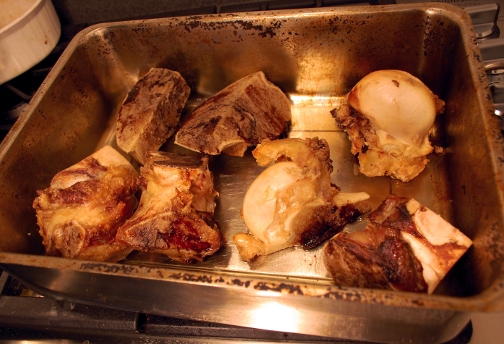 The bones will have released a lot of fat, which you should drain from the pan without discarding any carmelized cooking bits. Add the knucklebones and the brown flavor bits to a soup pan. Add the vegetable ends, bay leaf, and water.
Bring to a boil then reduce to a simmer. Cook for about three hours or until the beef broth is golden brown and flavorful.
Taste the broth. Add about half the salt, taste. Add remaining salt. (I do it this way to avoid over salting.)
Strain out the bones and vegetables, then transfer the broth to the fridge overnight. A disc of fat will form on the top of the broth. Remove the fat and discard.
Put the remaining broth to containers and freeze until needed. Enjoy!

4 thoughts on “How To Make Beef Broth”