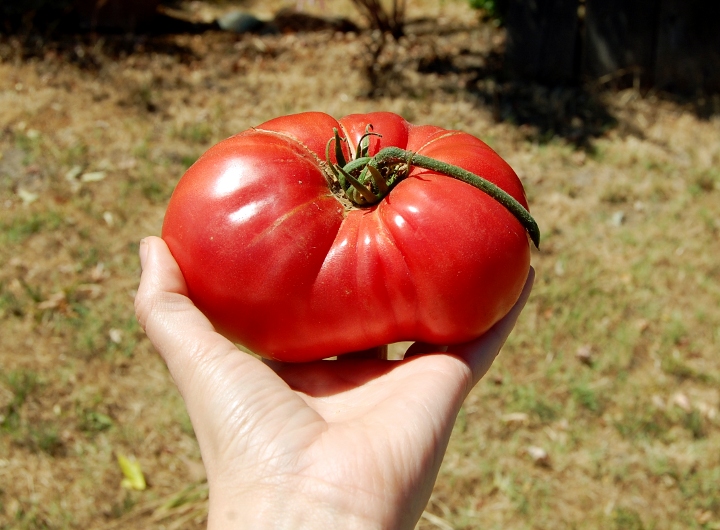 One of the great things about growing your own tomatoes is that they can be stored lots of ways. For example, last year I talked about how to sundry tomatoes in your oven. But usually I just freeze the tomatoes in containers. That way, I can pull them out for sauces, soups, or any other dish whenever I want.
Of course, frozen tomatoes aren’t as good as fresh tomatoes–you certainly wouldn’t want them in a salad–but they do have their charm. I know some Italian chefs prefer to work with canned or frozen tomatoes over fresh tomatoes. In any case, you’ve got to do something with the excess harvest from your tomato plants, right?
Here is my method for freezing tomatoes: a. clean the tomatoes, b. remove the skin, and c. put them in a freezer-safe container and freeze. Easy. I don’t bother with pureeing or slicing the tomatoes at this stage because I might want to use whole tomatoes later on. Also, cutting the tomatoes means you are likely to lose some of the juices in the process, which is sad.

How To Freeze Tomatoes
You will need:

Directions:
First, prepare the tomatoes. Wash the tomatoes. With a knife, cut out the stem and any bruisings or bad parts of the fruit.
After you are done, it’s time to remove the skins from the tomatoes. Here is a trick to make this easy: get a large pot of boiling water. Beside that, put a bowl of ice water. Drop the tomatoes into the boiling water for 30 seconds-1 minute, then fish out with a slotted spoon. Drop them into the ice bath. When they are cooled, transfer them to the strainer to get off excess water. The skin will come right off. Much easier than a vegetable peeler!
Finally, put the tomatoes into the freezer-safe container. I usually smash them up a bit so they are sitting in their own juices because I find they freeze better that way. Seal the container and transfer to the freezer. Now you can have tomatoes all winter long.
So that’s how I do freeze tomatoes. What’s your method?

6 thoughts on “How To Freeze Tomatoes”